Niels Bruynseels fulfils his childhood dream in the STAWAG Prize

A childhood dream came true for the Rolex Grand Slam contender Niels Bruynseels today already: a victory at the CHIO Aachen. He achieved this in the STAWAG Prize.

Twelve 1.50 metre-high obstacles and 14 fences separated the Belgian rider, Niels Bruynseels, from fulfilling the long-cherished wish of finally winning a jumping competition during his fourth visit to the CHIO Aachen. The Course Designer, Frank Rothenberger, hadn’t made it easy for the riders: “It really was a difficult course for a speed competition,” the 34-year-old reported. “I was lucky because I was one of the last to go.” Then you can work out how much you have to risk. In Bruynseels’ case that was a mixed calculation. He didn’t want to risk everything. But on the other hand he knew that his ten-year-old Quaprice daughter, Lady Cracotte, is a horse that is fast by nature: “I have only had her for about three months. But she has won at least one class at each show so far. She loves going fast and she always wants to win!” Today, she did just that. None of the seven pairs who followed were able to beat the clear round in 61.48 seconds that had put the Belgian show-jumper and his horse into first place.

Lorenzo de Luca from Italy and the Irish-bred grey horse, Limestone Grey, came closest to his time (62.10 seconds). Marcus Ehning was pleased to take third place with Firth of Lorne. The stallion competed the last time here in Aachen four years ago, at the time under Katrin Eckermann, with whom he took a fall at a water fence in both the Mercedes-Benz Nations Cup and the Rolex Grand Prix. The chestnut stallion was subsequently sold to the USA, but he returned to Germany a few weeks ago and to Marcus Ehning – who together with Funky Fred, with whom he came third yesterday in the Turkish Airlines Prize of Europe, now has a further fantastic sun of his Olympic gold horse, For Pleasure.

Talking about fantastic horses – Niels Bruynseels also raved about the quality of his Lady Cracotte. But when things get serious on Sunday in the battle to win the Rolex Grand Prix, where for him half a million Euros is at stake should he win the Major in Aachen after his victory in `s-Hertogenbosch, he will be placing his bets on his top horse, Gancia de Muze. 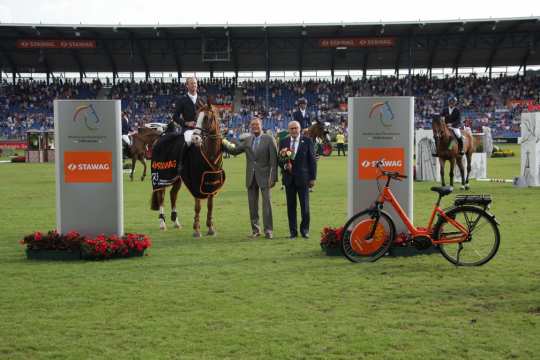