14 obstacles including a tricky triple combination and the famous double water jump were the tests in the RWE Prize of North Rhine-Westphalia, which separated the horses and riders from the 200,000 Euros and the qualification for the Rolex Grand Prix on Sunday. Especially the triple combination comprising of a triple barre as the first element, followed by an upright with a light plank in the middle and a mighty oxer as the final element put the riders to the test.

Jana Wargers and her Holstein-bred Limbus son, Limbridge, were the first pair to jump clear. The next 40 pairs didn’t manage to join her for the jump-off. Even the two Olympic gold medallists, Ben Maher and Explosion W, who won the also won the Turkish Airlines – Prize of Europe in 2019, collected eight faults.

Then, pretty much towards the end of the field, Scott Brash (GBR) with Hello Jefferson and Nicolas Delmotte (FRA) riding Urvoso du Roch both jumped clear.

Jana Wargers was the first to go in the jump-off, she opted for a safe round: Clear in 47.03. Scott Brash also jumped clear and reached the finish line faster: 45.81 seconds. But Nicolas Delmotte and Urvoso du Roch claimed the victory with an even speedier round: 45.03 seconds!

Nicolas Delmotte: “I am delighted to win here in Aachen, it is every rider’s dream. I am very proud of myself, but even more so of my horse. After the Games, he had a break and this is his first big show afterwards, so this victory is amazing. I saw him for the first time as an 8-year-old, when he was competing at 1.10-metre level with an amateur and I noticed immediately that he was special. He is very sensitive. It took 5 years for us to reach this level.

He was very sensitive, he used to refuse with his former rider and he has an unusual technique. I schooled him for a long time to get to this level and to get the most out of his technique.“ This obviously functioned very well. The pair namely already won the Grand Prix in La Baule and Chantilly this year. But Delmotte also knows that the Rolex Grand Prix on Sunday is a of totally different calibre: “I don’t know what will happen.”

Scott Brash, the British rider, who is the only rider to have won the Rolex Grand Slam of Show Jumping to-date, was a little more confident. He did however find it difficult to compare Hello Jefferson with Sanctos, who carried him to the victories in Geneva, Aachen and Spruce Meadows. But he did say: “I know he (Jeffersen) is capable of winning any Grand Prix in the world. He has the quality to win on Sunday. But everything else has to go right too.”

And first of all, everyone has to beat Jana Wargers, who is performing impressively in Aachen. One can say that her achievement today is quite a surprise, incidentally also for herself too: “Unbelievable! I am super happy and really didn’t reckon with it, but my horse was so cooperative. I am really proud of him.” Her aim this week was to qualify for Sunday. Which she has already done, but the trend is definitely towards becoming an overachiever… 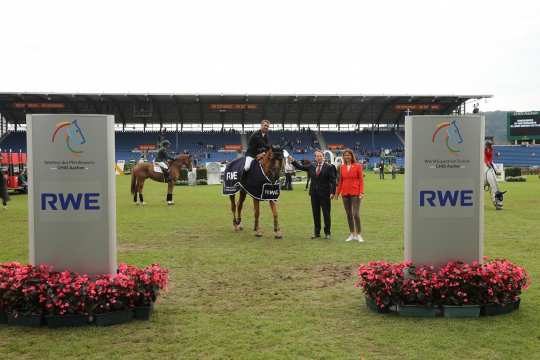