Neuss? Cologne? Neuss. Nail-biting result in the Prize of Sparkasse

Neuss Grimlinghausen vs. Team NORKA from VV Köln-Dünnwald (Cologne) – the Prize of Sparkasse in the team vaulting turned into a duel that couldn’t have been more exciting. In the end, on a score of 8.298 the group from Neuss asserted themselves against the team from Cologne (8.216).

Neuss won the compulsory test, Cologne the freestyle. However, the scores in the second round were much closer – 8.653 and 8.675. As in the previous year, third place went to the Italian group, C.I.M. Italy with Hot Date Tek, lunged by Laura Carnabuci, who finished on an overall score of 7.713.

Germany’s national coach, Ursula Ramge, already had reason to celebrate at lunchtime today with two such groups: “The freestyle routines of both teams were fantastic!” she said delighted. The group from Neuss performed their freestyle to the theme “Alice in Wonderland”. Team NORKA relied on futuristic design. Both teams risked everything, to the extent that the crowd had to hold its breath on several occasions when some of the lifts were performed!

Whereas in the case of Neuss-Grimlinghausen, the team comprising of Madita Schramm, Sophie Hofmann, Lara Schmitt, Mona Pavetic, Leon Huesgen and Pauline Riedl, included several Championship debutants, almost all of the athletes that competed for Cologne have won individual or pas de deux medals: Thomas Brüsewitz, Torben Jacobs, Corinna Knauf, Jana Zelesny, Miro Rengel and Justin van Gerven. Team Neuss had a completely new line-up this year, but relied on Delia FRH, an experienced horse that was lunged by Elisabeth Simon. In the case of Team NORKA it was the other way round – an established team, but a new horse: Picardo.

In the light of this both team leaders were extremely satisfied. Elisabeth Simon from Team Neuss explained regarding her new team: “The compulsory test was super, we couldn’t have hoped for a better result at the moment. And if one wins the CHIO Aachen, one can’t be anything but delighted!” Patric Looser, former World Champion in the men’s classification, emphasised: “We are very happy! We had only trained one single time with Picardo. So taking this minimal preparation into account, we can be very proud of our performance!“ Picardo wasn’t the only horse that was really electric today.

No wonder! The stands were crammed full down to the very last seat and the atmosphere was fantastic. Many of the spectators are more or less regular visitors on the CHIO vaulting weekend. If one asks them what attracts them in coming to Aachen every year for in some cases the past six or seven years, they promptly reply: “The CHIO is an absolute must-attend event if you love horses!“ And especially when one gets to experience such terrific sport, like in the first competition of the Prize of Sparkasse. 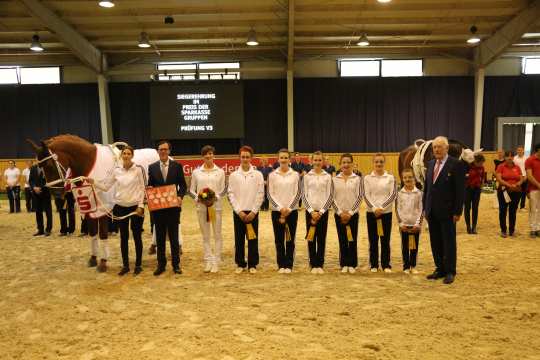