The Swedish show-jumper Henrik von Eckermann galloped over the finish line and took the victory in the NetAachen Prize at the CHIO Aachen 2016, the World Equestrian Festival with Gotha FRH. He relegated the German youngster Maurice Tebbel with Camilla PJ and the Belgian rider Olivier Philippaerts with H&M Gitania into second and third place, respectively.

Henrik von Eckermann rides for the Olympic gold medallist, Ludger Beerbaum. His boss rode Gotha FRH himself until Eckermann took him over after the Olympic Games in 2012. The pair were a good combination from the very beginning and won team bronze at the European Championships in 2013, represented their country at the World Equestrian Games in 2014 and have achieved numerous further international victories and placings. However, the two of them didn’t get off to a good start at the CHIO Aachen 2016. In the Prize of Europe on Wednesday, they had to retire because the mare lost her confidence slightly after making a mistake. “That is why I wanted to use today’s class to make sure she regained her confidence. I am really glad that we succeeded in doing so.” His tactics were simple and paid off completely: “I simply let her do everything. She is a very fast horse anyway.”

Henrik von Eckermann will be riding in the light-grey jacket of the Beerbaum Stables for just over one more month. Then, he is turning self-employed. “However, it is not yet certain what concrete form this will take on,” commented the Swedish rider, who is considered to have a particularly fine hand. 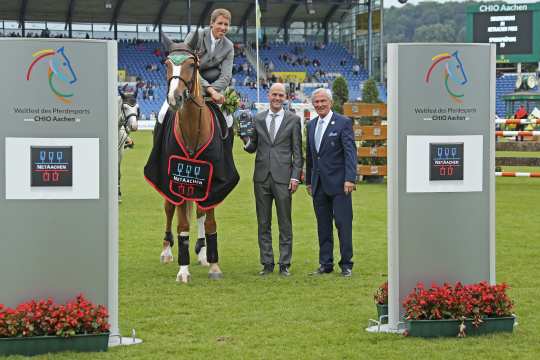