The Egyptian rider, Nayel Nassar, has been a member of the show jumping world elite for many years. But he has never competed at the CHIO Aachen, the “Pinnacle of the Sport”, the highlight of the sport, as he put it. He is making his debut in 2022. And he already picked up the gold ribbon today in the STAWAG Prize – riding an aspiring youngster.

Nayel Nassar was already the second to go in the STAWAG Prize, a 1.50-metre jumping class with the eleven-year-old SBS gelding, El Conde by Filou de Muze. 39 pairs later it became clear that the time of 68.48 seconds the pair notched up was unbeatable. At least, if one wanted to remain clear. Hence, it was Egypt’s national anthem that rang out over the Aachen Soers this afternoon. Second place went to Gerrit Nieberg with the Swiss-bred Baloussini son, Blues d’Aveline CH, (68.67), followed by Lorenzo de Luca from Italy with the Selle Français stallion, Cash du Plessis (69.26).

An elated Nayel Nassar was delighted: “This place really is a dream come true, the highlight of the sport. The spectators are incredible, from the very first day on. I am thus overjoyed and proud to be here. And the fact that I won makes it even more special.”

Nassar thinks very highly of El Conde. The gelding is rather unique because his mother’s pedigree line comprises almost completely of ponies. But anyone who is familiar with ponies, knows that once you have won them over, you have a friend for life. And El Conde isn’t an exception here either, said Nassar: “He is always by me and extremely fast. A true fighter!” He is first of all going to have a day off tomorrow and then he will compete on Saturday again. His rider, who is married to Bill Gate’s daughter, Jennifer, hopes to qualify for the Grand Prix on Sunday. With this goal in mind, he has among others brought his top horse, Igor van de Wittemoere, along with him. 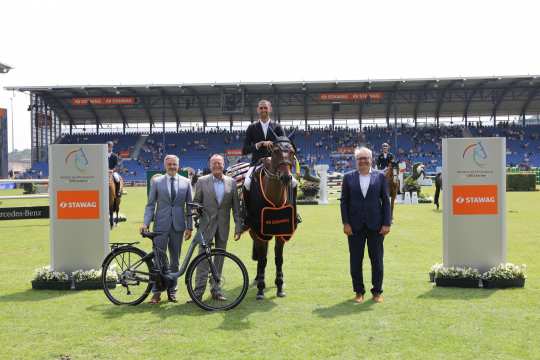