Not only the young jumping riders, also the young dressage riders have their own classes in Aachen, the Prize of the Lieselott and Klaus Rheinberger Foundation. The first winner comes from the Netherlands and is called Marten Luiten.

The Prize of the Lieselott and Klaus Rheinberger Foundation comprises of two classes. Today, the FEI individual test of the Young Riders was on the agenda. The Dutch rider Marten Luyten and her mare Fynona have proven that they are experts in this test several times. Most recently a few months ago in Oliva Nova (ESP), where they claimed the European Championships title of the Young Riders. Today, the pair excelled with a performance that was rewarded with a score of 78.912 percent.

That meant Luiten had a clear lead over her European Championship team colleague, Thalia Rockx with Golden Dancer de la Fanzenda, who finished on a score of 74.853 percent. Third place went to the best German pair Luca Sophia Collin and Descolari (74.824 percent). So, it was a close race. Incidentally, the medals at the EURO in Oliva were awarded in exactly the same order.

Marten Luiten will be a guest at the Soers more frequently soon together with the Danish dressage rider, Sara Aagard Hyrm with Skovborgs Romadinov, who came fourth (74.294 percent). Alongside other further dressage talents, the two of them have namely been chosen by Isabell Werth to take part in the Programme of Excellence in the scope of the CHIO Aachen Campus. This means they will be trained by Isabell Werth at regular intervals, will receive tips on how they can keep themselves and their horses fit, etc. The aim of the programme: To train aspiring young talents, who will take part in the five-star Tour in the Deutsche Bank Stadium in the future. 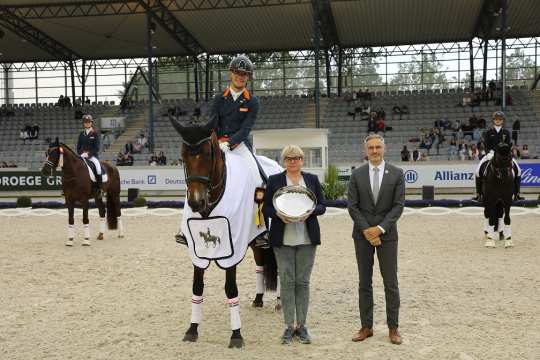