The Dutch rider, Marten Luiten is the benchmark in the Prize of the Liselott and Klaus Rheinberger Foundation, the new competition for young dressage riders at the CHIO Aachen.

The Dutch three-time European Champion of the Young Riders, Marten Luiten and his mare Fynona, were awarded the fantastic score of 82.350 percent, which meant they also won the Freestyle at Prix St. Georges level in the Prize of the Liselott and Klaus Rheinberger Foundation. They were the only pair to receive a score over 80 percent.

Second place went to the Danish rider, Sara Aagaard Hyrm with her Danish Warmblood, Skovborgs Romadinov. Finishing on a score of 79.750 percent, she remained just under the 80 percent mark.

Incidentally, both the winner and the runner-up are among those talents that Isabell Werth as Dressage Head Coach has selected to participate in the Programme of Excellence in the scope of the CHIO Aachen Campus. Hence, they will visit the Soers at regular intervals over the coming 12 months to train with Isabell Werth, learn the essentials from veterinarians regarding injury prevention and the management of their horses and receive tips from experts on their own physical and mental fitness, etc. 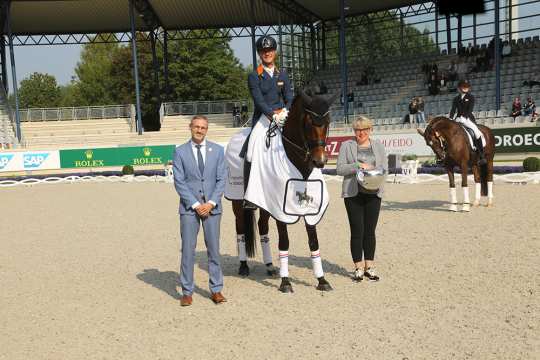