The bronze medal winner at the German Show Jumping Championships 2018, Michael Kölz, competed in Aachen for the first time this year and had stated that he “didn’t want to put in a bad performance”. “He certainly didn’t do that – even if the speedy rider from the USA, Margie Goldstein-Engle, managed to outpace him in the SAP Price.

Margie Goldstein-Engle had saddled the nine-year-old Rhineland-bred Dicas, whom she has had for around a year, for the 1.45-metre jumping competition against the clock. The gelding has already been placed many times in competitions at this level, but has never competed at the CHIO Aachen before. But he evidently likes the Soers: He achieved a clear round in the fastest time of 65.97 seconds, which meant the victory.

Michael Kölz, the German Championship bronze medallist, who fulfilled a long-standing childhood dream competing here at the Soers, came second with the Moritzburg State Stud stallion FST Dipylon by Dinglinger (68.10). It wasn’t the only rosette he picked up this weekend either. He came third in the Opening Jumping with Dipylon and tenth in the Two-Phase Jumping Competition on Wednesday.

The Italian rider Lorenzo de Luca secured himself third place in the SAP Prize with Limestone Grey after finishing clear in a time of 69.84. 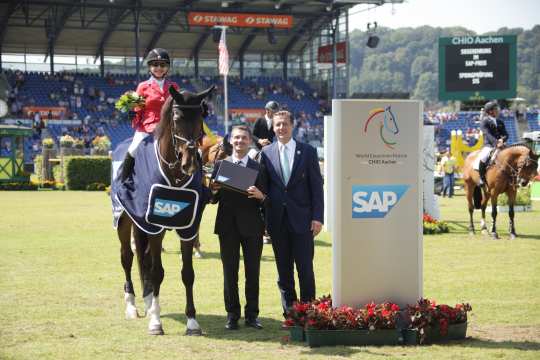 The winner is congratulated by Bernd Leukert (from left), Management Board member of SAP SE Products & Innovation, and ALRV Supervisory Board member Wolfgang Mainz.