When her Majesty Queen Silvia of Sweden drives into the Main Stadium of the CHIO Aachen on July 12th, she will be sitting in an exquisite carriage. She will namely be appearing in the Royal Gala Barouche, which was built in Hamburg in around 1850 by the German carriage manufacturers, Croissant & Lauenstein. The Queen will officially open the CHIO Aachen 2016 during the Opening Ceremony.

Her Majesty will be accompanied by the Mounted Battalion of Royal Guards, the Royal Fire Brigade Band and the Royal Stables. Tickets as well as information on the complete programme for this exceptional event are available online or from the hotline: +49-(0241) 917-1111.

The Royal Coat of Arms is found on the doors of the Gala Barouche. The carriage lamps comprise of etched glass and are each decorated with a gold-plated royal crown. The padding was made out of French silk. This carriage can optionally be drawn by four or six horses. It is normally used for the Opening of Parliament, on national holidays or recently for the 70th birthday of the King, on April 30th, earlier this year. Today, the carriage is being driven by two coachman wearing royal postilion uniforms. The gold-plated royal harness is elaborately decorated with crowned rings. The royal horses are Swedish warmbloods that can either be used as riding or driving horses. As during the Opening Ceremony, royal carriages are frequently accompanied by the Swedish Army’s Battalion of Guards on foot and horseback. 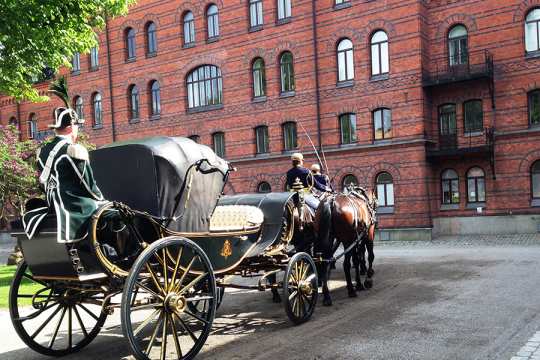