The “Horse & Symphony” concert has already formed the spectacular prelude to the largest and most famous equestrian sport event in the world since 2003. To commemorate the 20th anniversary, the CHIO Aachen is putting on a very special show on June 23rd and 24th, 2023.

Under the motto “Last Night of the Proms”, the Deutsche Bank Stadium will once again be transformed into a stage for unforgettable moments. The excellent live music of the Aachen Symphony Orchestra combined with breath-taking show elements is traditionally what makes the event so outstanding. Next year, we can look forward to exceptional show performances among others from the British rider, Charlotte Fry. The reigning double-World Champion in the dressage will perform a freestyle routine to the sounds of the Symphony Orchestra. “The fact that we are able to welcome Charlotte Fry, one of the currently most successful riders in the world, to the Horse & Symphony, a few days before she battles it out for the victory in the Deutsche Bank Stadium, is simply fantastic,” said CHIO Aachen Sports Director, Birgit Rosenberg, delighted.

But of course alongside the British dressage rider and the Symphony Orchestra, the focus will of course as always be on the horses, whether they are performing a liberty dressage or taking part in the vaulting or a pony quadrille.

The conductor on the evenings of June 23rd and 24th, will be Christopher Ward. The first note of the extremely popular format will sound under the direction of the General Music Director of the City of Aachen at 8.30 p.m., respectively. The staging of the anniversary edition promises to be more spectacular than ever. Tickets are available online and from the hotline on +49-(0)241-917-1111). 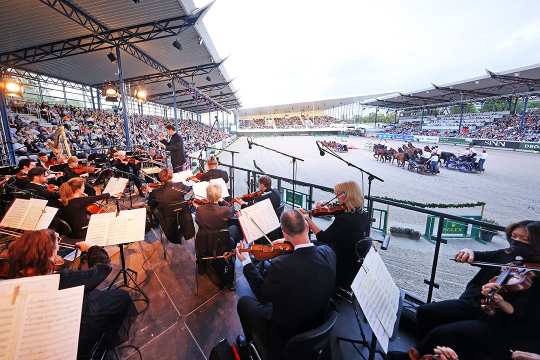 The Aachen Symphony Orchestra under the direction of the General Music Director, Christopher Ward, during the Horse & Symphony concert in 2022. Photo: CHIO Aachen/Andreas Steindl