Lars Volmer on course for victory in Germany’s U25 Jumping Trophy of the German Top Equestrian Sport Foundation, Prize of the Müter Family

The 19-year-old Lars Volmer sped to victory in the final qualifier for Germany’s U25 Jumping Trophy of the German Top Equestrian Sport Foundation, Prize of the Müter Family with his Oldenburg-bred mare, Maja. The pair reached the finish line around five seconds faster than his fellow competitors.

“Lars, you didn’t need to hurry that much!“, the mother of one of the other riders called over jokingly to Lars Volmer, the winner in the final qualification for Germany’s U25 Jumping Trophy of the Foundation of the German Top Equestrian Sport, Prize of the Müter Family, as he made his way to the prize-giving ceremony. Whereby the 19-year-old hadn’t even really put his foot down that much. Indeed his 10-year-old Oldenburg-bred Contendro daughter, Maja, had even hesitated slightly at the first two obstacles he had noted. After all, she had never set hoof on a grass arena the size of the Main Stadium at the Soers before. “But actually it doesn’t really matter what the arena is like. Maja is good everywhere!” praised her rider. Like today, when the mare sped over the fences to reach the finish line clear in a time of 60.95 seconds and thus beat his fellow competitors by almost five seconds.

Laura Klaphake, who is nominated as the reserve rider for the Mercedes-Benz Nations’ Cup at the CHIO Aachen 2017 tonight, is a good example of the successful concept of the U25 Jumping Trophy. And she is not the only one. The first winner of the Final in the year 2014, Denis Nielsen, won the German Championship title the year after. Guido Klatte Jr., winner in 2015, was second in the World Cup Final in Omaha (USA) in the spring. And Kendra Claricia Brinkop, who claimed the gold ribbon in the Final last year, won the Grand Prix in Oldenburg shortly afterwards.

“We are very grateful to the Foundation and to the Müter family, for making this here possible for us!” the national coach, Heinrich-Hermann Engemann, stressed. “It means we have a unique promotion concept for young talents in Germany, which makes it easier for the riders to make the transition from the U21 tour into top sport. Many nations are very envious of this system!”

Lars Volmer confirmed: “It is a super chance for us to take part at shows that we wouldn’t be able to compete at otherwise. One sees so many good riders there, also from abroad, whom one can pick up the odd tip from.”

He has plenty of opportunity to do just that here in Aachen. Nevertheless he is not more nervous than usual. Lars’ mother revealed that the winner of this year’s Prize of the Best had never had weak nerves. As a pony rider, he was mostly the last to ride at important team competitions. That is notoriously the position that can possibly decide between defeat or victory. Lars is looking forward to the Final of the U25 Jumping Trophy on Saturday. A jump-off will decide the victory. And fast jump-offs are Maja’s speciality said Lars… 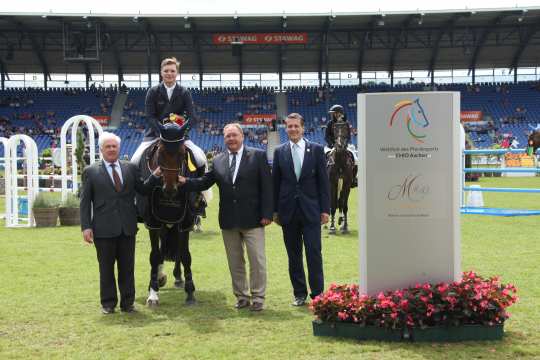