It was ladies first in the Final of the U25 Jumping Cup of the Foundation of German Competition Sport, the Prize of the Müter Family, at the CHIO Aachen: Kendra Claricia Brinkop, Laura Jane Hackbarth and Angelique Rüsen were the only three riders to reach the jump-off and thus took the top three placings. In the end, the 21-year-old Kendra Claricia Brinkop reached the finish line first with the Westphalian-bred state stud stallion, À la Carte NRW. Laura Jane Hackbarth came second with Carisma, ahead of Angelique Rüsen in third place with Dolocia.

The 21-year-old Kendra Claricia Brinkop is a member of the so-called perspective group of the German Olympic Riding Committee (DOKR), which promotes young talented riders. Today, wasn’t the only time this yielded fruit. A few weeks ago the rider from Schleswig-Holstein already won bronze at the German Championships of the Lady Show-Jumpers – behind Angelique Rüsen incidentally, who claimed the silver medal. So, Aachen was Kendra Brinkop’s small revenge. But above all a fantastic experience: “One already imagined everything to be so big here. But when you head for the ring and you see the stands to the left and the right…. The name ‘World Equestrian Festival’ fits 100 percent!” Riding here is an absolute highlight, added Brinkop. But then to win, that beats everything.

Her two fellow competitors were of the same opinion. Angelique Rüsen (24) explained their goals for the season had been the German Championships and Aachen. Mission accomplished, one can safely say. Now she can concentrate on the younger riders from Christian Ahlmann’s stables that she trains. Ahlmann, who she rides for, is her role model.

Laura Jane Hackbarth (25) runs her own yard in Schleswig-Holstein with her family. She mostly trains alone at the moment, she is so to speak an autodidact. But she will soon train with the equestrian expert, Achaz von Buchwaldt, who is considered to be a real champion trainer.

For the three of them, Aachen was also a bit like a meet & greet with their role models. Kendra Claricia Brinkop said: “I wish I had the calmness of Carsten-Otto Nagel, the fighting spirit of Janne Friederike Meyer and Marcus Ehning’ style.” The National Coach of the Young Riders, Markus Merschformann, is extremely grateful to the organisers, the ALRV, that the U25 riders can ride alongside the stars of the sport at a show like Aachen: “The young riders can’t learn as much anywhere else than here.“ Show Director, Frank Kemperman, also emphasised that he is delighted to have the youngsters on board at the CHIO. 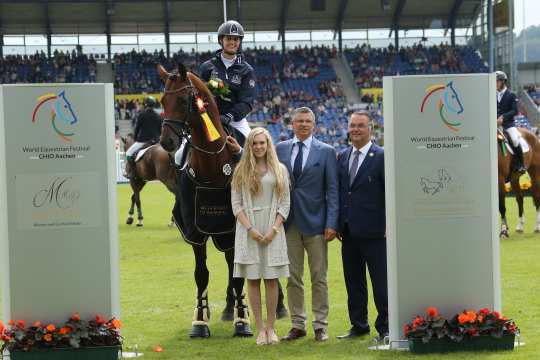