The dressage talent, Jil-Marielle Becks, hadn’t banked on it at all – not only was she able to compete in Aachen in her first U25 season. She also won two competitions in the Prize of the Liselott and Klaus Rheinberger Foundation straight off.

First of all the 20-year old Jil-Marielle Becks claimed the victory in the individual classification of the Intermédiaire II (and with the team of the U25 Nations Cup) with her Damon’s Satelite, then she went one better in the Short Grand Prix: The judges awarded the pair a score of 73.128 for their performance. “A good result when one considers that the Intermédiaire II is actually our strong point,” commented Becks and admitted: “I didn’t dream we would be so successful here. I had hoped to come under the top three, but the fact that we have won twice is overwhelming!” The pupil of the master of riding, Klaus Balkenhol, was not only delighted with her result, but also that her ten-year-old Westphalian-bred gelding, Damon’s Satelite, presented himself so well here at the Soers. He wasn’t distracted by the atmosphere in the Deutsche Bank Stadium whatsoever. Becks‘ explanation: “He was born at our stables. I have known him since he was young and have ridden him regularly since he was a four-year-old. We more or less grew up together.” That obviously has a bonding effect.

Second place went to the Netherlands, to Jeanine Nieuwenhuis with TC Athene. She and Becks know each other well. Among others they competed against each other in 2016 at the European Championships of the Young Riders in Oliva, Spain. At the time Jeanine Nieuwenhuis claimed gold in both the individual classification and in the freestyle. Jil-Marielle Becks ad Damon’s Satelite won silver and bronze. This time Nieuwenhuis had to make do with being placed behind Becks. She left the arena with a score of 71.821 percent.

Sweden’s Marina Mattsson finished third with the Hanoverian-bred Quarterback son, Quartermain (70.821 percent). The reigning U25 European Champion, Lisa-Maria Klössinger, was close at her heels with FBW Daktari (70.615 percent). Klössinger was rather disappointed because her highly-sensitive gelding felt much more relaxed in the Deutsche Bank Stadium than he had done in the previous competition. But of all things her best exercise, the flying-change à tempi which counts double went wrong today. That cost valuable points! But Klössinger intends to make up for it in the freestyle tomorrow. 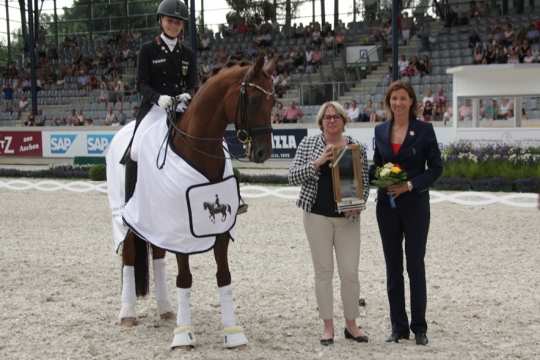 The winner is congratulated by Anja Heeb-Lonkwitz, managing director of Liselott and Klaus Rheinberger Stiftung, and Stefanie Peters, member of the ALRV advisory board.