It has long since become tradition that the partner country of the CHIO Aachen is welcomed on the market place in Aachen. And so the citizens of Aachen crowded in front of historical Town Hall on Monday evening when this year’s partner country China presented an exciting show comprising of acrobatics, music, culture and dancing in the heart of the city – and thus offered a foretaste of what can be expected at the Opening Ceremony tomorrow (8.15 p.m. live on WDR).

“We not only ordered special weather today, but also a special partner country at our side. I am particularly delighted that the community of Chinese people living in Aachen is taking part in this reception today and tomorrow during the Opening Ceremony,” stated Carl Meulenbergh, President of the organisers of the CHIO, the Aachen-Laurensberger Rennverein e.V. (ALRV). The Lord Mayor, Marcel Philipp, pointed out in his welcome speech that China has already had a fixed place in the Imperial City for decades: “There are many connections between Aachen and China. We have maintained a partnership with Ningbo for 32 years, there are school exchanges, business relations and many visitors from China. It is now a great pleasure to be able to celebrate this in the field of equestrian sports too.”

Even before the exceptional convoy of carriages headed by the City Riders of Aachen and the flag bearers reached the market square at 6 p.m., the CHIO mascot Karli and the musician Liang Dong got everyone in the mood for a one-hour open-air festival. A fantasy-like show dotted with poesy followed. Not only two horses from the world-famous Terracotta Army pranced proudly over the cobble stones, also the lion dance – an old Far Eastern custom accompanied by drums and cymbals – made up part of the agenda. Various artists from the Chinese National Circus demonstrated agility, a wealth of skill and elegance and revived the 2000-year history of Chinese acrobatics.

The Chinese community that lives in the Imperial City were also part of the programme. The children’s choir from the Chinese school rendered a version of a poetic song – an ode to jasmine blossoms. The young musicians were accompanied by the mezzo-soprano, Sissi Qi Wang, the A-cappella choir of the RWTH Aachen and the traditional instrument, the erhu, played by Yao Wang. The traditional Aachen Club of Chinese Scientists and Students enchanted the spectators with a “danced” fashion show, where imaginative clothing from different Chinese dynasties was presented. Here modern met tradition! During the finale, four young ladies really demonstrated their hitting power. The group “Manao – Drums of China” already opened the Olympic Games in Beijing in 2008. Now they caused a huge drum roll in Aachen with their drumming skills.

Furthermore, Wenbo He, Consul for Culture from the General Consulate of the People’s Republic of China also attended the ceremony: “I am delighted that China was chosen as this year’s partner country for the World Equestrian Festival.” The NRW Premier, Armin Laschet, who already attended this event last year announced: “I am very pleased about this partner country. At the same time we can show the Chinese guests, how well Aachen can organised such a major sporting event.” 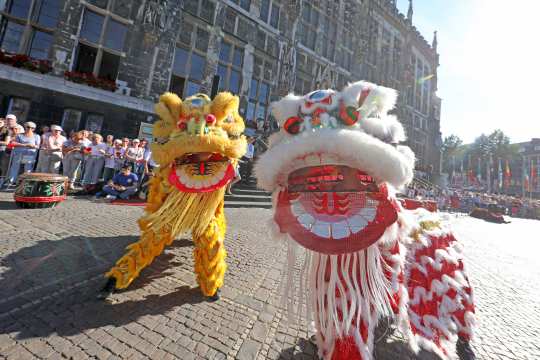 A traditional Chinese lion dance in the heart of Aachen – the CHIO makes it possible. Photo: CHIO Aachen/Andreas Steindl