Housen takes the second victory in the NetAachen Prize

Alexander Housen (20) already demonstrated yesterday in the NetAachen Prize that he wasn’t voted Talent of the Year in his native country, Belgium, without good reason. Today, he even topped yesterday’s performance.

Before the grand finale with a jump-off takes place in the early afternoon, the Young Riders had the chance to ride their second horses in a speed competition, the NetAachen Prize. Second class, second victory for the Belgian show-jumper, Alexander Housen and his fast Irish-bred horse, Rockwell RC. And once again he completed the course three seconds faster than the rest of the field. In a time of 61.34 seconds, Housen topped the rankings ahead of three further Belgian riders.

Second and third place went to two candidates of the CHIO Aachen CAMPUS Programme of Excellence under the aegis of the Dutch national coach, Jos Lansink: Dieter Vermeiren with Kadicha VDS and Axel Vandoorne with Novelle v. Eegdeken. The clock stopped at 64.02 and 64.58 seconds respectively. The Belgian triumph was completed by Sacha Beghuin with Elcup van Beek II Z, who finished fourth (66.01).

Malin Reipert and Nikita achieved the best German result. The pair delivered a clear round in 68.56 seconds to take fifth place. 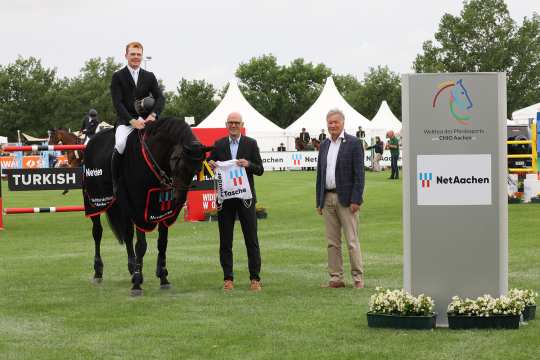