The Dutch rider, Anne Meulendijks, already headed the field in the Intermédiaire II, in the Prize of the Liselott and Klaus Rheinberger Foundation 2017, the U25 tour in the dressage arena at the CHIO Aachen. Today, she picked up a further gold ribbon in the Grand Prix of the series.

The CHIO 2017 is the just 24-year-old Anne Meulendijks’ premiere at the Soers. What is it like? “Thrilling”, “exciting”, “overwhelming”, “incredible” – the adjectives the National Champion from CHIO’s partner country, used to describe her feelings, thoughts and impressions, were endless. In spite of the overpowering experience, Anne demonstrated nerves of steel. Together with her 12-year-old KWPN gelding, MDH Avanti, she had already contributed significantly towards the Dutch victory in the first U25 Nations’ Cup at the CHIO Aachen in the Intermédiaire II. Today, the pair’s performance was even more impressive. The judges awarded them a score of 72.279 percent. What were Anne’s tactics? “To do everything exactly the same as always. We need our routine.” This evidently includes standing as far right as possible during the prize-giving ceremony. Anne hadn’t expected to win today, but she had certainly hoped she would.

However, it was a close victory. As in the Intermédiaire II, with her Negro son, Bailey, Maxime van der Vlist was close at Meulendijks’ heels. Her score: 72.233 percent. Denise Nekeman came third with Boston STH (71.236 percent), which meant the top three rankings all went to Holland. So to say, the young ladies confirmed their Nations’ Cup victory once again. 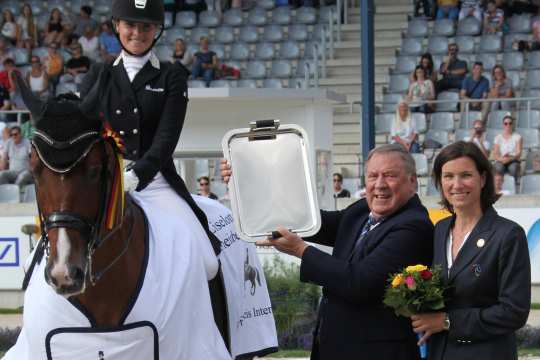