Henrik von Eckermann is the best of the best

He leads the world ranking list, is double World Champion and now also the winner of the 21st Rolex IJRL Top Ten Finals: Henrik von Eckermann thrilled the audience at the CHI Geneva with his King Edward.

It is absolutely silent in Geneva’s Palexpo as Henrik von Eckermann circles through the course with his King Edward. 8,500 spectators hold their breath and experience why the Swede and his sporting partner are currently the measure of all things in international show jumping. The unbelievable power that the gelding, who is only 1.65 metres tall, has in his hind leg makes it look as if a bouncy ball is jumping over the mighty obstacles. In addition, narrow paths and a high frequency. During the 48.42 seconds that the dream team needed to complete the second round of this prestigious competition without any faults, nobody in the stands doubted that this would be the winning ride of the evening. Cheering whistles accompany the two top athletes on the last line, the little chestnut manoeuvres over the last oxer with a massive jump. The two are still in the air when a thunderous applause erupts. The audience is beside itself. After all, it is also a kind of home victory for the Swiss: Henrik von Eckermann is married to the Swiss Jannika Sprunger, son Noah has a Swiss passport, the star horse child Edward is Swiss-owned.

But not only the audience celebrates the winning pair of the evening, the competitors also pay their respects. The best riders in the world, including Olympic champion Ben Maher and world number two Martin Fuchs, are lined up in the kiss and cry zone and give appreciative applause. And of course the rider is also overjoyed that after double gold at the World Championships in Herning, Denmark, he has now achieved another major coup. “I have been dreaming of winning this important competition for years,” Henrick von Eckermann beams a little later, while King Edward, wrapped in his winning blanket, seems to enjoy the attention he has received. “There are not many horses like him,” the rider says about his sport partner. “I in so proud to be able to be his rider.” Together with the Swede, the Frenchman Simon Delestre in second place and von Eckermann’s compatriot Peder Fredericson are allowed on the coveted podium that evening. 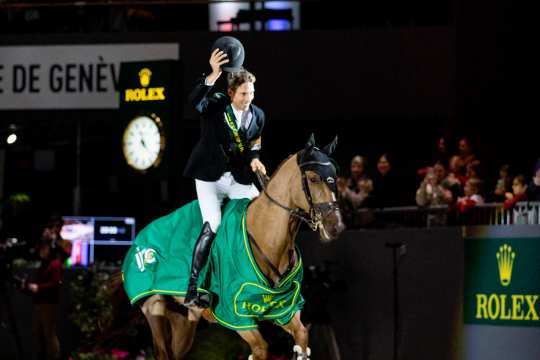