In 2015, Guido Klatte Jr. was the first winner of Germany’s U25 Jumping Trophy of the Foundation of German Top Level Equestrian Sports, Prize of the Müter Family, at the Soers in Aachen. At the time, he won the final with Coolio – and now the two of them are on track to repeat their success.

Guido Klatte Jr. and the eleven-year-old Oldenburg-bred Coolio by Contendro were the first pair to go in the qualifier of Germany’s U25 Jumping Trophy of the Foundation of German Top Level Equestrian Sports, Prize of the Müter Family. They mastered the challenges of the 1.45 metre high course with a clear round in 60.21 seconds. Indeed, the duo set a benchmark that none of the following pairs was able to beat.

Not even Maurice Tebbel or Laura Klaphake, who have both been nominated for the German team in this evening’s Mercedes-Benz Nations Cup. Klaphake came second on the Holstein-bred Cracker Jack daughter, Camalita (0 faults/62.55 seconds). Maurice Tebbel ranked fourth with Camilla PJ by Calme (0/64.01). Richard Vogel, the winner of the qualifier in Balve, who rides for the Beerbaum Stables, squeezed his way into third place between the two of them with Solitaer (0/63.55).

It was a very special occasion for Guido Klatte being able to compete at the Soers: “It was always my childhood dream to have the opportunity to ride here,” the 22-year-old commented. Whereby he turned his back on riding for several years during his early youth. “I played football for a long time. Then the fascination got the better of me again! I have my family to thank for that.” For example, Coolio belongs to Guido’s sister, Victoria. But horses play a big role for the Klatte family overall, as one can see from Klatte’s reply to the question what is the programme for him next at the CHIO 2018: “I am riding another horse in the Sparkassen Youngsters-Cup later, which belongs to my other sister and after that another young horse that my cousin owns in the STAWAG Prize.” Furthermore, Guido Klatte Jun. is in the privileged situation to have his own shuttle service for his horses if he needs to travel abroad – as for instance in 2017 when he was able to qualify for the World Cup Finals in Omaha, the USA with his top horse, Qinghai, where he succeeded in finishing sixth. Namely, his father Guido Klatte Sen. runs a horse shipping agency. Hence, Guido Klatte Jun. is well-prepared for all eventualities. 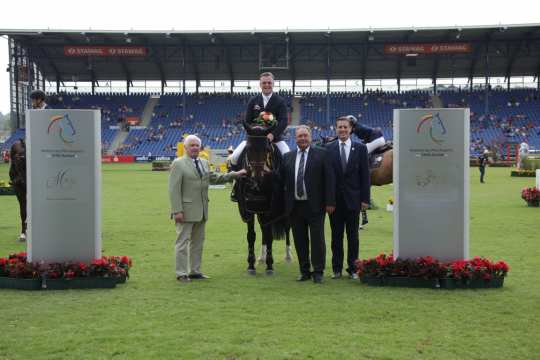