The ten days of the CHIO Aachen are, of course, dedicated to world-class sport. However, the event has also long since become social gathering of the high-society: Many guests from the fields of politics, social life, sport, business and the media are awaited at the Soers.

The Media Night is traditionally the social highlight. Exciting guests stroll over one of the most famous red carpets on the sports scene and are traditionally welcomed by the ALRV President Stefanie Peters and co-host Prof. Dr. Hermann Bühlbecker, owner of the Lambertz group. The gala evening is being staged parallel to the CHIO Aachen Opening Ceremony on the evening of June 28th.

A number of celebrities are awaited at the Aachen Soers over the days of the CHIO. From political circles the German Interior Minister, Nancy Faeser, has confirmed her attendance. Ursula van der Leyen, President of the Commission is coming from Brussels, the State Premier Hendrik Wüst from Düsseldorf and the head of the Green Party, Mona Neubaur, will also be attending. In addition, among others the singer, Wincent Weiss; the Vice Chairman of the German Sports Aid Foundation,  Franziska van Almsick; Germany’s most successful author, Ildikó von Kürthy; the “Höhners”, who will play their self-composed CHIO anthem “In diesem Moment” (At this moment) for the first time; restaurant owner, Michael Käfer; IOC member, Britta Heidemann; TV chef, Björn Freitag and the star violinist, David Garrett, will be present at the CHIO Aachen. 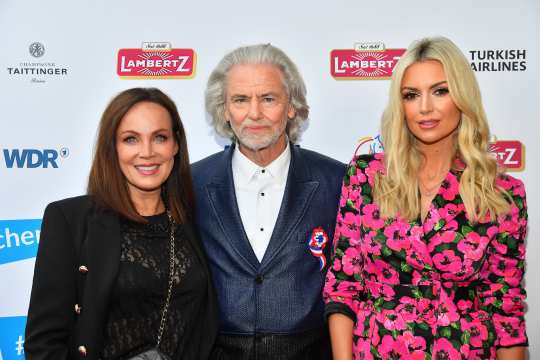 Following tradition, the co-host Prof. Dr. Hermann Bühlbecker welcomes the guests of the CHIO Aachen Media Night on the red carpet. In the photo from the year 2019 he is welcoming the actress Sonja Kirchberger (left) and the model, Rosanna Davison. Photo: CHIO Aachen/ Raphael Stötzel