One can quite rightly maintain that the rider from Karlsruhe Jenny Lang-Nobbe and her Holstein-bred Loverboy, called “Lori” for short, are Freestyle specialist. When the pair do piaffe, passage and pirouettes to a cleverly mixed Pink Panther medley, they are in their element and often walk off with top placings. This was also the case in the LUMILEDS Prize today, the Grand Prix Freestyle of the CDI Tour at the CHIO Aachen, the World Equestrian Festival, which they won after being awarded a score of 76.80 percent. “I am so flashed at the moment, that I don’t know what to say,” the totally overwhelmed 29-year-old bubbled. Then, all of a sudden quite a few things occurred to her: “It was a great ride, a fantastic feeling. It may not have been the first time that Lori has competed in this stadium, but the atmosphere in Aachen is so special that one never knows what to expect. But Lori was totally concentrated today and danced to the music with me. It was fantastic fun. And it is something totally special to win in Aachen. I am going to enjoy this victory!”

Charlott-Maria Schürmann with Burlington, came second on a score of 73.875 percent. The B squad member also belongs to the newly-founded Deutsche Bank Equestrian Academy, which provides ten dressage talents with special support for their sporting and professional careers for a year. Third place in the amazing setting of the floodlit Deutsche Bank Stadium went to Jan-Dirk Gießelmann and Real Dancer, a further German B squad member (73.675). 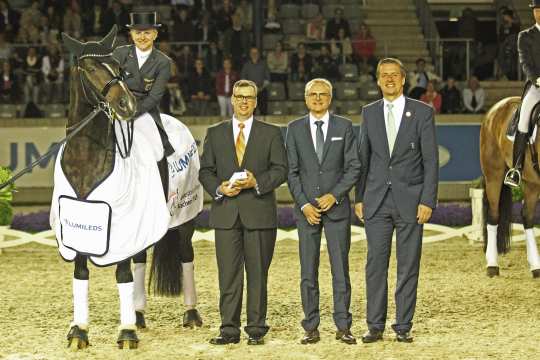