She is the declared “soulmate” of Isabell Werth. There is going to be a gala evening especially for “Bella Rose” at the World Equestrian Festival, CHIO Aachen 2022. At 8.30 p.m. on Friday evening, July 1st, 2022, the motto in the Deutsche Bank Stadium is going to be: “Ciao Bella!”

It was somehow typical for this extraordinary horse: A few days before Bella Rose was supposed to be retired from the sport at this year’s CHIO Aachen, panic stations were on the agenda instead of celebrations: She had to be rushed to the clinic with a serious case of colic. “She had her own plans again,” Isabell Werth said, now able to laugh the episode off. In the meantime, Bella Rose is not only as fit as a fiddle, her horseshoe can also be found on the legendary CHIO Aachen “Walk of Fame”. So all that is missing now is the farewell gala.

“We have now re-planned the occasion to take place at the CHIO Aachen 2022,” stated Birgit Rosenberg, Head of Sport at the CHIO Aachen. Friday evening, floodlights, Deutsche Bank Stadium: There is going to be a fantastic setting on July 1st, 2022, when Bella Rose enters this dressage arena for the final time and Isabell Werth saddles her light-footed dancer for the last time. A final floodlit performance in the Deutsche Bank Stadium, a final performance in front of the crowd in Aachen. A final performance, when the pair’s joint sporting journey comes to an end at the showgrounds of the Aachen Soers.

The fact that the 17-year-old mare is something special was clear to the 14-time winner of the Deutsche Bank Prize at the CHIO Aachen immediately. “Bella Rose captivated me during our first encounter already,” the 52-year-old recalled the moment, 14 years ago when she was stood in front of the Bellissimo M progeny for the first time. The most successful dressage rider of all time says that simply everything about her is exceptional: Her temperament, her talent, her movements, her motivation. And even if Isabell originally had to work out how to channel the equally exceptional surplus energy, today the pair can look back on a dream career, which also repeatedly led the two of them back to Aachen for magical moments. Here, the pair not only danced to victory in the Deutsche Bank Prize in 2019, they also celebrated their comeback after a long period of injury. The chestnut mare was unable to compete for three and a half years, before returning to the international circuit and claiming the victory in the HAVENS Pferdefutter Prize and the Lindt Prize at the CHIO Aachen in 2018. What followed is sporting history: After winning two gold medals at the World Championships in the USA in 2018, three titles followed at the European Championships one year later in Rotterdam, the Netherlands. And after claiming team gold and individual silver at the Olympic Games last summer in Tokyo, the right point in time had come for Isabell Werth to retire Bella Rose from the sport. And this is exactly what she is going to do now with just as much glory, albeit with a slight delay. And of course it is going to happen at the CHIO Aachen 2022. “Where else?” said Isabell Werth. Aachen, the Soers, the Deutsche Bank Stadium, has always been a very special venue for the two of them: “Here we always felt obliged to a very special extent to go all out and give this fantastic crowd back as much as possible.”

This is precisely the reason why the two of them are returning to the Deutsche Bank Stadium one final time – the venue they associate with so many victories and valuable memories. And which they love so much – also or specifically because of the crowd in Aachen. The CHIO Aachen management is not revealing what is planned for the farewell gala on the evening of July 1, 2022, yet. It is to remain a surprise. But as Isabell Werth commented, one thing is certain already: “It is going to be very emotional again.”

Tickets for the dressage classes at the CHIO Aachen are available from the online ticket shop. 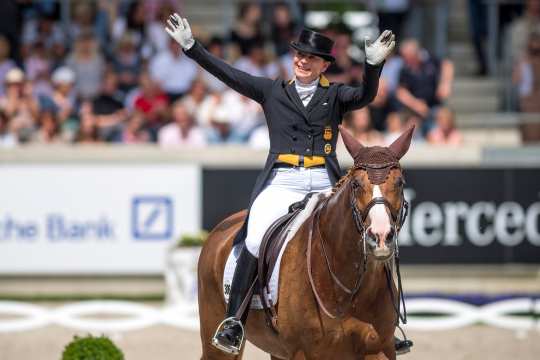 Isabell Werth and Bella Rose in the Deutsche Bank Stadium in Aachen.