Frederic Wandres and Quizmaster won the Prix St. Georges at the CHIO Aachen 2022, the Prize of VUV – Vereinigte Unternehmerverbände Aachen – with exactly the same result as last year.

The judges awarded Frederic Wandres and his ten-year-old Hanoverian-bred gelding Quizmaster 75.059 percent for their performance today in the Prix St. Georges, the Prize of VUV – Vereinigte Unternehmerverbände Aachen. That is exactly the same score that the Quasar de Charry-son received last year, too. In 2021, he ranked second with that score, today it sufficed to claim the gold ribbon. Ingrid Klimke, the athlete who is probably the busiest rider here in Aachen – she is namely competing in both the dressage and eventing – came second with her young aspirant, Freudentänzer, (73.912), ahead of the Swiss rider, Andrina Suter with Del Curto (72.441).

Frederic Wandres says that Quizmaster – incidentally a former Young Riding Horse German Champion – has established himself in the Small Tour, i.e. at Prix St. Georges and Intermédiaire I level: “He keeps being awarded one top score after the other. He presented himself very well today and really played on his strengths.” Whether that has something to do with the atmosphere in the Deutsche Bank Stadium? Yes and no, as Wandres replied “The atmosphere is indeed special. With him it’s a very fine line. It can quickly become too much.” But fortunately that wasn’t the case today. Quizmaster was highly concentrated and celebrated a fantastic test. We will see the pair again on Saturday in the Intermédiaire I, the WOTAX Prize. 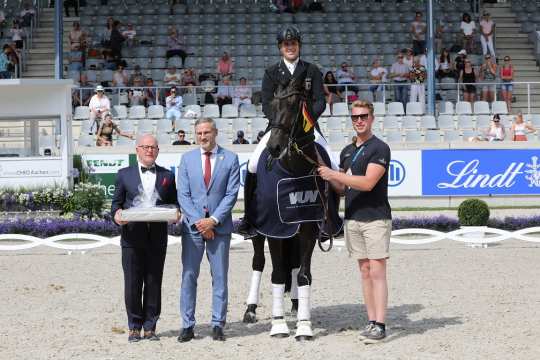