Her name is frightening, but actually Daniel Deußer’s eight-year-old mare, Killer Queen, only kills metres in the ring. And obstacles that are stood in her way. Like today in the first of three trials in the Sparkassen-Youngsters-Cup.

Naturally, the Sparkassen-Youngsters-Cup is – as the name would suggest – a competition for young horses. Nevertheless, the obstacles are 1.40 metres high. However, Daniel Deußer and his Belgian warmblood mare, Killer Queen by Eldorado van de Zeshoek, let the course look like a beginner’s class for young horses. They galloped to the finish line clear in the best time of 70.57 seconds. Daniel Deußer: “I didn’t actually put my foot down, but if one had counted the canter strides, I bet she took four less than the other horses. She simply has a huge canter.”

And not only that, she also has the attitude that horses need to be able to excel in a stadium like the Soers: “She has a lot of temperament, lots of thoroughbred in her, but an extremely clear head,” is how her rider describes her. “It doesn’t matter where, she always jumps brilliantly, she doesn’t let herself be distracted by anything.” She demonstrated this impressively today – Deußer incidentally was of the same opinion: “The way she jumped here today, I am convinced that she will also compete here in the Prize of Europe or Prize of NRW in one or two years’ time!”

Daniel Deußer can drink a toast with his yard and training colleague, Lorenzo de Luca, later today. The Italian show-jumper was namely in the lead with his also eight-year-old Evita van’t Zoggehof by Golden Hawk until Deußer came and relegated him into second place (71.34 seconds). Marcus Ehning finished third with the Wesphalian-bred For Contest-daughter, Filippa K, followed by Christian Ahlmann and Cornwell by Cornado.

Both the Italian rider de Luca and Daniel Deußer are at home in Belgium and ride for the Stephex Stables, who also own both horses. And that is not the only thing they have in common. Both of their mares were bred in Belgium, the one is registered as a BWP (Belgisch Warmbloedpaard), the other as a SBS (Belgium Sporthorse). Both descend from extremely successful mare lines. 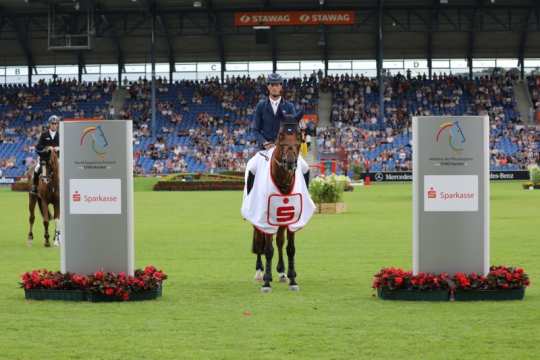 Daniel Deußer, the winner of the first of three trials in the Sparkassen-Youngsters-Cup.