Final of Germany’s U25 Jumping Trophy of the German Top Equestrian Sport Foundation, Prize of the Müter Family goes to Maurice Tebbel

In Germany’s U25 Jumping Trophy, show-jumping heroes of tomorrow are made. The Final at the CHIO 2017 went to Maurice Tebbel, a rider who already joined the ranks of the famous riders on Thursday.

Maurice Tebbel, 23 years old, significantly contributed to the German victory in the Mercedes-Benz Nations’ Cup on Thursday evening with two clear rounds. Today, a further decision was on the agenda, the final of Germany’s U25 Jumping Trophy of the German Top Equestrian Sport Foundation, Prize of the Müter Family. For this competition, Tebbel had saddled a youngster from his stables, the just eight-year-old Rhineland-bred stallion Don Diarado by Diarado. Careful, with a lot of potential and a little spooky, was how Tebbel described his stallion. In other words, everything the heart of a show-jumper can wish for. And Maurice steered the bay stallion over all of the difficult tasks of the challenging 3-star course in a routine-like manner. Six pairs reached the jump-off, the winner reached the finish line almost three seconds faster than his closest fellow competitor.

Second place went to Marisa Braig with the Zangersheider-bred gelding Pablito van Erpekom by Pablo v. Berkenbroeck. She jumped clear in a time of 52.07 seconds. Thanks to a further clear round Alexander Potthoff finished third with the Oldenburg-bred Quidam’s Rubin daughter, Quinara, in spite of the pair notching up the slowest time in the jump-off (55.92 seconds).

2017 is Maurice Tebbel’s year here in Aachen. First the Nations’ Cup and today the Final in the U25 Jumping Trophy. “Winning a competition here in Aachen, is always something special!” commented the overwhelmed winner.

A chance for everyone

Heinrich-Hermann Engemann, who together with Otto Becker trains the German show-jumpers, said “We are very lucky to have many young talented riders here in Germany, who come from equestrian backgrounds. That makes it much easier. The parents of many of the participants in this competition have also already ridden in Aachen.” This is also applies to the winner. Engemann also knows: “The competition is tough here. There are many talented young riders and we try to give them all a chance. Series like the U25 Jumping Trophy offer them all the opportunity to prove themselves.” The successful trainer reported that many other Chefs d’Equipe were envious of Germany’s promotion system that accompanies the children and pony riders through to the world elite. The U25 Tour is the link between the Young Riders and top sport. Maurice Tebbel’s results in Aachen and also the further achievements of hitherto winners of Germany’s U25 Jumping Trophy (i.e. Denis Nielsen’s German Champion title in 2015 and Guido Klatte’s sixth place in the World Cup Final in 2017) are the best example that this works.

What does one need if one wants to make it to the top? “It is not possible without talent,” stressed Engemann. “One can learn to ride, but one needs instinct. Not everything is plannable. One has to make a lot of decisions intuitively. This intuition is very important, plus the readiness to work hard for success, one has to be consistent and self-critical. Personality also plays a major role.” 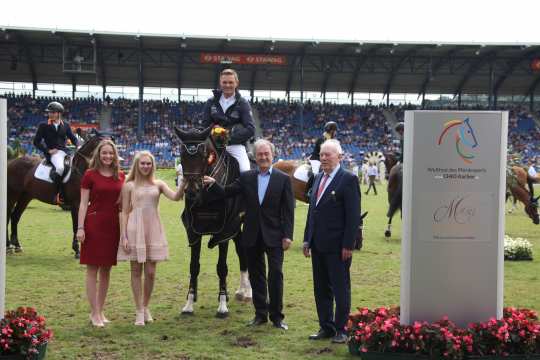