Victory for Team Netherlands in the Boehringer Ingelheim Nations Cup

Since 2017 the Australian driver, Boyd Exell who lives in the Netherlands and the Dutch driving sport legend, Ijsbrand Chardon, have been taking it in turns to win the Prize of the Richard Talbot Family. Last year it was Chardon’s turn. So, this year the ball was in Exell’s court. Even if Chardon undertook everything possible to stop him from winning. The Dutch driver claimed the victory in the Boehringer Ingelheim Nations Cup. And the final obstacle driving class, the Baron and Baroness of Buchholtz Prize went to Switzerland.

An exciting final day for the four-in-hand drivers! The obstacle driving competition, the Baron and Baroness of Buchholtz Prize, decided the outcome of both the Boehringer Ingelheim Nations Cup and that of the Prize of the Richard Talbot, the individual classification. The best four-in-hand driver in the cone driving class was Jérôme Voutaz from Switzerland.

The combined individual classification was exciting and ultimately went to the Australian driver, Boyd Exell, again. He had already gone into the lead after the dressage, but he had to temporarily hand over the top ranking to his archrival, Ijsbrand Chardon, after the Marathon yesterday. However, when absolute precision was called for again, Exell was slightly better today. He secured the overall victory after finishing second in the cone driving class, whereas Chardon had to make do with 13th place today. Exell’s final score was 158.32 minus points, Chardon clocked up 166.48 minus points. Third and fourth place went to two German drivers: Christoph Sandmann (168.68) and Mareike Harm (169.08).

The latter were both mainly responsible for German taking second place in the Boehringer Ingelheim Nations Cup, this time they were less than two points behind the Dutch team, who are unbeaten since 2007! The Dutch team scored 335.920 minus points, Germany finished second with 337.760. Third place went to the Belgian team on 377.540 minus points.

In addition to Ijsbrand Chardon, the Dutch team comprises of his son Bram and Koos de Ronde. The German trio was rounded off by Mareike Harm at the side of Christoph Sandmann and Georg von Stein. Belgium was represented by Dries Degrieck, Glenn Geerts and Sam Gees. 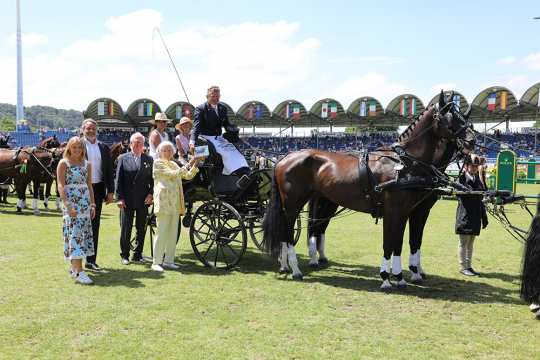