Her debut appearance at the CHIO Aachen 2019 is guaranteed to stick in the mind of the 25-year-old Swedish rider Evelina Tovek for a long time to come. After her victory in the Mercedes-Benz Nations Cup with the team yesterday, she went one further today in the VBR-Prize.

Riding the ten-year-old, Rhineland-bred Contendro daughter, Cortina, Evelina Tovek namely recorded the fastest time in the 1.50-metre two phase jumping competition, the VBR-Prize. The clocked stopped at 32.48 seconds. As the last to go, it lay within the power of the Dutch rider, Jur Vrieling, to snap the victory away from the Swedish rider with his eleven-year-old Dallas by Douglas, but he ultimately took 0.52 seconds longer to reach the finish line. Third and fourth place also went to the Netherlands thanks to Willem Greve with Faro (32.25) and Maikel van der Vleuten with her experienced horse Verdi (36.46), who already carried him to team gold at both the European and World Championships.

Evelina Tovek has been living in Germany for two years. She is located at Henrik von Eckermann’s Stables near Bonn and her current focus lies on competing. Since she has been training with the rider who used to work for Ludger Beerbaum and who is the current contender for the Rolex Grand Slam, her performance has continually improved. But neither she nor her trainer had reckoned with her joining the ranks of the world elite that fast: “Yesterday, Henrik said to me that he had never imaged at the beginning that we would win the Nations Cup in Aachen together just two years later.” Tovek’s goal this year is to compete at the European Championships. Next year her aim is to be nominated for the Olympic Games. 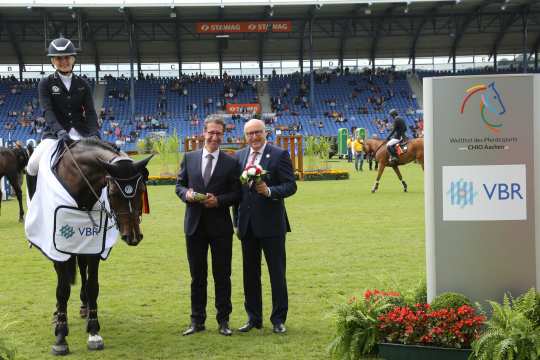