Prize of the VUV to Michael Eilberg

The first dressage competition at the CHIO Aachen 2016, the World Equestrian Festival, was already like a battle of the giants. Whereas the so-called Small Tour doesn’t attract a lot of attention at other shows, in Aachen’s Deutsche Bank Stadium one can admire the stars of tomorrow in these competitions. Today’s Prize of the VUV – Vereinigte Unternehmerverbände Aachen was no exception here. World Champions competed against German National Champions today.

The winner, Woodlander Farouche under the saddle of Michael Eilberg, was the World Champion of the Five and Six-year-old Dressage Horses. After achieving a score of 76.368 percent today, she proved that she has made it to advanced level.

The winner of the Final of the Nuremberg Burg Cup (which is similar to the German Championships of the Young Dressage Horses) came second on a score of 75.263 percent: Santiago, ridden by Germany’s Olympic silver medallist of 2012, Dorothee Schneider.

The horses that came third and fourth were also German Champions as young horses. Third place went to the seven-year-old stallion, DSP Belantis with the five-time Olympic gold medallist Isabell Werth (73.895 percent). Belantis came second at the World Championships for Young Dressage Horses in 2016. The horse belongs to the State Stud Neustadt/Dosse to 50 percent, so it is more or less a four-legged civil servant. The remaining 50 percent is owned by Madeleine Winter-Schulze, Isabell Werth’s long-standing friend and sponsor.

The horse that ranked fourth (73.026 percent) is also just seven years old: the stallion Escolar, was ridden by the Olympic team gold medallist, Hubertus Schmidt. Escolar actually won the German Champion title twice, as a three-year-old and as a four-year-old.

Sixth and seventh place also went to Germany: Suppenkasper with the team World Champion, Helen Langehanenberg (72.921 percent) and Geraldine with Ingrid Klimke (71.553). Incidentally, the latter, who is the daughter of the most successful dressage rider of all time, Dr. Reiner Klimke, is not only competing in the dressage arena in Aachen, but also in the DHL Prize of the eventers. 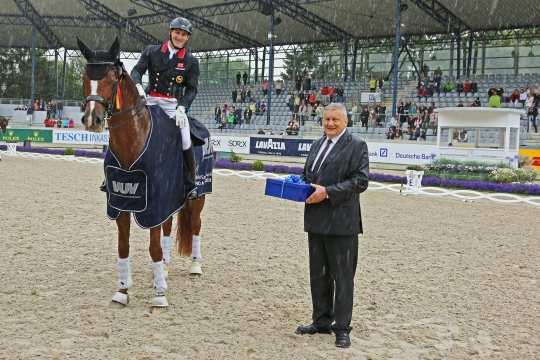 Michael Mahr, chairman of the board of the VUV - Vereinigte Unternehmerverbände Aachen, gratulates the winner. Foto: CHIO Aachen/Michael Strauch