DHL Prize – Mission “We are going to claim back the Cup!” is underway

The German eventers got off to a super start in the DHL Prize at the CHIO Aachen. After the dressage and jumping, the team have a significant lead. But the road to victory tomorrow leads over a tough course.

The goal is obvious: “Our message is that we want the trophy back!” stated Hans Melzer, the eventing national coach, during the jumping competition of the DHL Prize earlier today. He has a good feeling that the team could do just that. His team riders, Ingrid Klimke with Horseware Hale Bob OLD, Michael Jung with La Bioshetique-Sam FBW, Sandra Auffarth with Opgun Louvo and Josefa Sommer with Hamilton – are lying in first, second, third and 14th place, in that order, after the dressage and jumping. To achieve this mission the trainer is obviously orientating his strategy on the success model of his colleague Becker, the national jumping coach: Three old hands (the silver-winning Olympic team of Rio, Klimke, Jung, Auffarth) and one newcomer (Sommer) result in the Nations’ Cup victory.

However, the course designer Rüdiger Schwarz has certainly set the riders a few difficult tasks in the course that stretches over the meadows of the Aachen Soers. Hans Melzer: “The course is comparable with a Championships course, really difficult. But I don’t think riding clear is going to be the problem, remaining under the allowed time is going to be the decisive criterion. That’s not going to be easy!”

The German’s have a clear lead. With an interim score of 105 minus points after the dressage and jumping, they are the overnight leaders, ahead of last year’s winners from Australia (122.70) and Sweden (135.80). The Australians also have promising prospects in the individual classification. Shane Rose with CP Qualified is currently lying fourth with 36.70 minus points, Christopher Burton and Nobilis are in seventh place (40.60). The remaining team members are Emma McNab with Fernhill Tabasco (45.40) and Katja Weimann with BP Cosmopolitan (66.50). 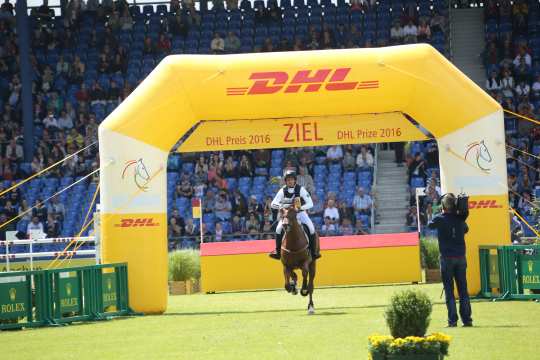