“The field of participants is outstanding this year.”

Show Director, Frank Kemperman, not only presented a host of facts and figures at the traditional press conference shortly before the show commences, he also announced that in all five disciplines – show jumping, dressage, eventing, driving and vaulting, the current number one athletes in the world ranking lists as well as top riders will be competing. “The field of participants is outstanding this year.”

Monica Theodorescu, the German national coach of the dressage riders agreed. “We are very well positioned. We are travelling to Aachen with a top team.” And even if the German dressage riders are the favourites to win at this year’s CHIO Aachen – according to Theodorescu claiming the victory in Aachen certainly can’t be taken for granted. She must know, after all she already became acquainted with the show in Aachen as a child. Because her parents were professional riders. Later, she competed at the Soers herself in the dressage competitions. In the meantime, she governs the fate of the German dressage squad in her capacity as the national coach. “I have gained a deep insight into the CHIO Aachen over the last 50 years. Aachen is simply the biggest and the best, but also the most demanding show in the world.” The competition is correspondingly high-class. For example, Great Britain’s exceptional dressage rider, Charlotte Dujardin, will be riding in Aachen for the first time in years.

Marcus Ehning definitely wouldn’t mind standing on the top step of the podium at the CHIO Aachen again either. The top German show-jumper claimed a perfect double victory last year after winning the Mercedes-Benz Nations Cup with the German team and jumping into first place in the Rolex Grand Prix. He will be riding for the German team again in 2019, together with Simone Blum, Daniel Deußer, Christian Ahlmann and Maurice Tebbel. “I have been competing at the CHIO Aachen for almost 20 years. Over the course of time one is no longer quite as nervous and can enjoy the show a bit more,” the experienced sportsman admitted with a grin.

Der CHIO Aachen has long since also become a media event, whether on TV, the social media, in the form of apps or other online formats, the images from the CHIO Aachen are transmitted across all media channels. Primarily also by WDR as the host broadcaster of the CHIO Aachen. ARD and WDR broadcast more than 30 hours of sport, “over 20 hours of which is live”, according to the WDR Sports Director, Steffen Simon. “Our coverage is really extensive,” commented Simon. Because the sports broadcasts are enhanced by numerous reports and articles in other formats – linear and digital. Not only the WDR sports editorial office, but also the online editorial team will cover the event extensively across the different channels. Of course, this also applies for CHIO Aachen’s own platforms. “With regards to the digitalisation the organisers of the CHIO Aachen have always been pioneering and ahead of the times,” stated Simon.

Michael Mronz, General Manager of the Aachener Reitturnier GmbH, presented a few of the innovations: For instance, there is going to be a completely revised CHIO Aachen app. “We can communicate with our fans in real-time via the app,” revealed Mronz. Beyond this, there are not only going to be more live images on the social media channels – a new passage in the contract with the copyright holder, SportA, makes this possible – but also a new social media magazine, called “CHIO live” as well as various formats with influencers from the lifestyle, food, fashion and equestrian sport sectors. And the CHIO Aachen partner, SAP, has developed a virtual reality experience for a novel equestrian sport simulator, which will enable the visitors to try out the cross-country course of the eventers, the SAP Cup.

And even if many of the competitions are already long since sold out, tickets are still available for various days. Accordingly, Carl Meulenbergh, President of the CHIO organisers, the Aachen-Laurensberger Rennverein e. V., banged the advertising drums for “his” show: “The true CHIO experience can be enjoyed best live in the midst of it all.” The Lord Mayor of Aachen, Marcel Philipp, is setting a good example here. He revealed that during the days of the show his diary is exclusively reserved for the CHIO Aachen after lunch. “It is a world-class event that takes place here and a gift for our city,” he raved. Incidentally, this year the event is characterised by French flair. Because the partner country of the CHIO Aachen this year is France. Among others, the most famous riding school in France, the Cadre Noir, the impressive Garde Républicaine as well as Jean-François Pignon, the liberty dressage master, will be making appearances during the floodlit Opening Ceremony in the evening of July 16th as well as co-shaping the remaining days of the show. 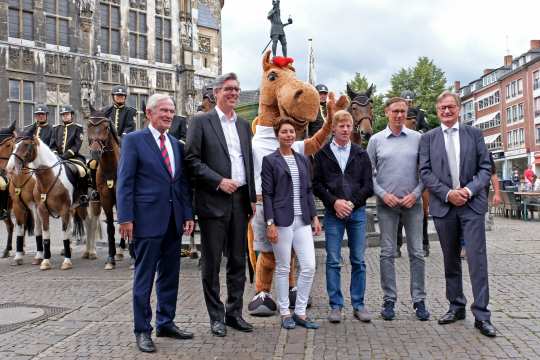