Cleverness triumphed in the Sparkassen-Youngsters-Cup Final

The last ones shall be first was the case in the Sparkassen-Youngsters-Cup. Great Britain’s speed specialist, Scott Brash, was the last to go in the jump-off of the Final and left his nine fellow competitors trailing behind him with his Kannan daughter. His prize? A top horse for the future.

Because, in addition to the prize money, the winner in the Final of the Sparkassen-Youngsters-Cup snapped up a foal with the exquisite pedigree Cash x Quidam de Revel. But we will have to wait for that story. The immediate future belongs to his eight-year-old Selle Français mare, Hello Vittoria. Brash is certain about that.

Anyone, who watched the Kannan daughter in the jump-off of the Final in the Sparkassen-Youngsters-Cup today, knows what he means. As fast as lightening and extremely well-versed for her age, Hello Vittoria sped through the turns and crossed the finish line in a time of 40.08 seconds, snatching the victory away from the also French-bred Uto Kervec daughter, Extase Ste Hermelle and Belgium’s Nicola Philippaerts. The pair had been in the lead until then with a time of 40.67 seconds. Third place went to the best seven-year-old horse, the OS stallion, Chad Blue PS by Chacco-Blue under Patrick Stühlmeyer. Here the clock stopped at 42.02 seconds.

When asked about Hello Vittoria, Scott Brash raved that he has been riding her since she was a five-year-old. “She is fantastic and such a clever mare! She is very, very careful, she loves her job and I think she is going to be a really good horse for the future.” 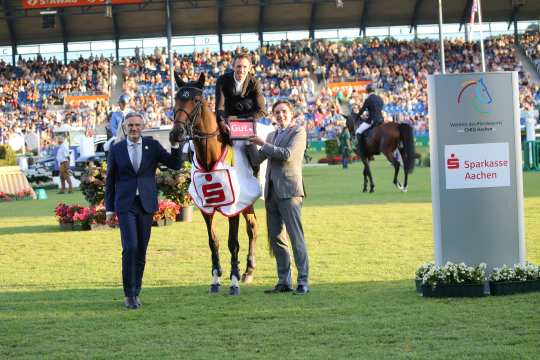