The Allianz Prize is traditionally the highlight in the Main Stadium on CHIO Saturday. For Christian Ahlmann today it was above all the moment that turned the for him hitherto unlucky Aachen weekend into a successful one.


Christian Ahlmann’s four-legged partner in the Allianz Prize today was Solid Gold Z. A horse that according to Christian Ahlmann knows exactly what to do as soon as he enters the ring. He demonstrated that impressively today.

The course designer, Frank Rothenberger, had built a challenging course in the 1.55-metre-high Allianz Prize this afternoon. But the result did him justice. Either the ten best pairs or all clear rounds qualified for the second round. And precisely ten pairs jumped clear.

Christian Ahlmann’s eleven-year-old Oldenburg-bred stallion Solid Gold Z by Stakkato Gold put in a fantastic performance in the jump-off again and crossed the finish line in an incredible time of 53.55 seconds. That was the fastest time and for Solid Gold Z one of the best achievements in his career so far Ahlmann reported.

Second place went to the birthday boy, the Swiss rider Bryan Balsiger with his Kashmir van Schuttershof daughter, Dubai du Bois Pinchet, (0/54.79 seconds). It was the first placing under the top three in Aachen for the 25-year-old. “A fantastic birthday present. But it would have been even better to come first, but Christian didn’t bestow that gift upon me,” he joked. The pair were followed by Harrie Smolders from the Netherlands with his aspiring youngster, the ten-year-old Holstein-bred stallion, Uricas v.d. Kattevennen by Uriko (55.61).

Christian Ahlmann said later: “Of course, one is always happy when one wins. But I am particularly delighted today, because I haven’t been placed here yet. My horses jumped well, but somehow it didn’t quite work out yet. I hope that is a good omen for the grand prix tomorrow with Dominator Z!” 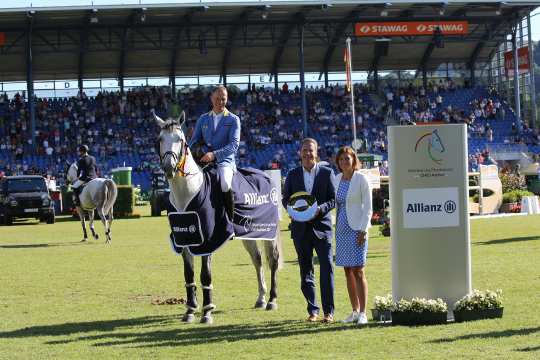