CHIO Aachen welcomes Lavazza and Schüco as their new partners

Two famous and traditional companies are supporting the World Equestrian Festival, CHIO Aachen, from this year onwards: “Lavazza” is the new official coffee partner of the traditional major sporting event and as a leading supplier of window, door and façade systems Schüco International KG is also on board among the pool of partners of the CHIO Aachen.

Lavazza, the world-famous Italian coffee roasting company, is in the meantime family-run in the 4th generation. The company dates back to 1895 – and is thus three years older than the organising company of the CHIO Aachen, the Aachen-Laurensberger Rennverein, which was founded in 1898. Lavazza is widely represented in the sport sponsoring sector and among others partners tennis events (Wimbledon, US, Australian and French Open, German Open and the MercedesCup). The traditional brand lends its name to the spectacular “Lavazza Prize” at the CHIO Aachen.

Schüco has been associated with the sport for over three decades – and now also with Germany’s largest sporting event, the CHIO Aachen. Schüco has been present at the world-famous showgrounds for some time already: For example, Schüco systems are installed in the façade of the Turkish Airlines Stand in the Main Stadium as well as in the new East Stand in the Deutsche Bank Stadium. Schüco is now among others also visible at the CHIO Aachen in the form of perimeter advertising in the stadiums. 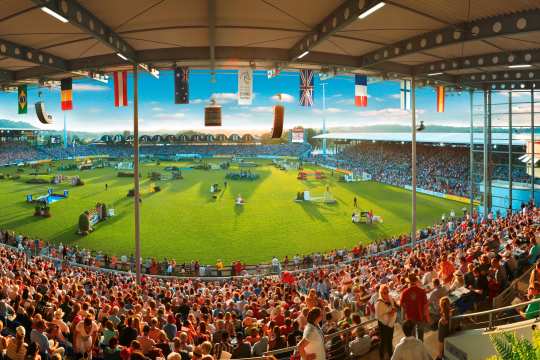