The Danish dressage rider, Cathrine Dufour’s weekend in Aachen couldn’t have gone better. The crowning glory today was her triumph in the Deutsche Bank Prize and the connected honour that she had thought was actually reserved for a different rider.

Cathrine Dufour and the just ten-year-old Westphalian-bred gelding, Vamos Amigos by Vitalis claimed the victory in the Deutsche Bank Prize 2022, the Grand Prix Freestyle of the CDIO Tour on a score of 88.375 percent. Dufour took part in five classes this weekend and won all five of them. “It is a huge dream to perform like that in 5 classes with 2 different horses,“ a visibly emotional Dufour commented and stressed that a big team stands behind her, who are all co-responsible for this success. She had never dared to dream that her name would be engraved on the winners’ board at the entrance to the Main Stadium of the Soers one day: “I thought it was only Isabell’s (Isabell Werth) name that was going to be written on that wall.” The theme that Dufour chose for her new freestyle music, which celebrated its premiere today in Aachen, fits in well with this: the soundtrack of the film “Warriors”. Dufour: “It sort of describes what it is like to fight your way to the top, the  daily struggle and then to go on to ride the freestyle in Aachen.”

Two horses that both won every class they have competed in, Vamos Amigos and Bohemian – Cathrine Dufour is in a luxurious position and she knows that too. But she was quite sure who her number one is: “Cassidy!”, her meanwhile 19-year-old, long-standing companion on the way into top sport. But she wouldn’t choose between her current top horses, Bohemian and Vamos Amigos. Also not with regards to the imminent World Championships in Herning. She won’t decide who she rides there “until the very last day”.

It was the third time the best German pair came second this weekend: Frederic Wandres and Duke of Britain. The pair achieved a further personal best, this time with a score of 83.880 percent. “It has been an amazing week from day 1 through to today,“ he stressed. It is a dream come true to be so successful with all three horses (in addition to Duke of Britain, also Bluetooth in the CDI4* and with Quizmaster in the Small Tour). And to be placed next to these world-class riders next to me.”

The other world-class rider Wandres was referring to a further Danish rider: Daniel Bachmann Andersen, who came third with Marshall-Bell on a score of 82.985 percent. 2022 also proved to be a special event in Aachen for Daniel Bachmann Andersen, not only because this is the best placing he has ever achieved in the Deutsche Bank Prize, but also because Marshall-Bell had actually been sold and had left his stables. But then, fortunately, the new owner decided to bring the gelding back to his trainer at least until the World Championships in Herning. Daniel Bachmann Andersen said: At the moment it hasn’t really sunk in yet, sitting here and after our journey, I am so proud and happy about the development over the days since we have been here. We grew back together and it worked out well. We changed a few things in the training. A little bit less of this, more of that. This experience has strengthened me and I am really proud.” And he will also make use of this opportunity in the future too, because even if the Austrian U25 rider, Nicola Ahorner, will ride Marshall-Bell in future, he will be at their side to train them.

Frederic Wandres was awarded the PIAFF Prize in memory of Liselott Schindling for the most successful dressage rider throughout the whole show. The “Dressage Champion of Aachen” is determined by adding up the results of the three CDIO competitions. As winner of all three classes, Cathrine Dufour won this title and thus also the bonus of EUR 15,000 that is donated by the Liselott Schindling Foundation to promote the dressage sport. 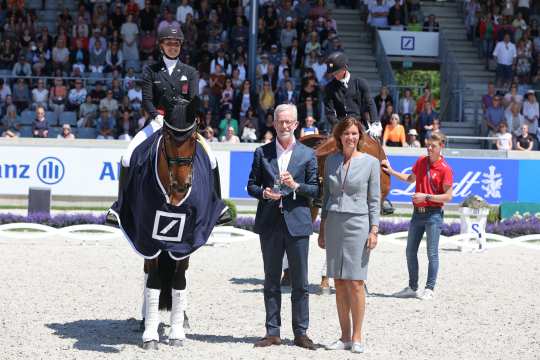