The Belgians dominated the happenings in the NetAachen Prize. But when it came down to the crunch, Alia Knack seized the victory in the Final.


Alia Knack and Campari VII that is a story that goes back a long way. In 2017, the two of them competed at the European Championships of the Children for the German team, i.e. for the under 14-year-olds. Last year, they represented Germany at the European Championships of the Juniors. Now, the rider from Baden-Württemberg, who has just turned 18 and who has moved up into the Young Riders age class, competed in Aachen for the first time and won the newly introduced NetAachen Prize for Young Riders straightaway with her partner in success, Campari VII. That could be one of the biggest in her career to-date.

The way Knack won was impressive. From eight pairs only four remained clear in the jump-off. And the other three pairs in the jump-off didn’t manage to beat the 47.87 seconds that Campari VII took to finish the course. Laura Hetzel (22) delivered the second-fastest clear round against the clock with her KWPN-bred mare, Ficardi B, in a time of 50.41 seconds. They crossed the finish line four seconds faster than the Canadian rider, Alicia Timm with her Irish-bred mare, Loughnavatta (54.,21), which claimed third aimed.

The Belgian show-jumper, Alexander Housen, who had won both of the previous competitions, also reached the jump-off with Warriors Glory, but unfortunately picked up four faults and even if he had jumped clear his time wouldn’t have sufficed to beat Alia Knack. He ultimately finished seventh behind his fellow countryman Dieter Vermeiren with Noblesse, who had trained for his appearance at the Soers at the CHIO Aachen CAMPUS Programme of Excellence. 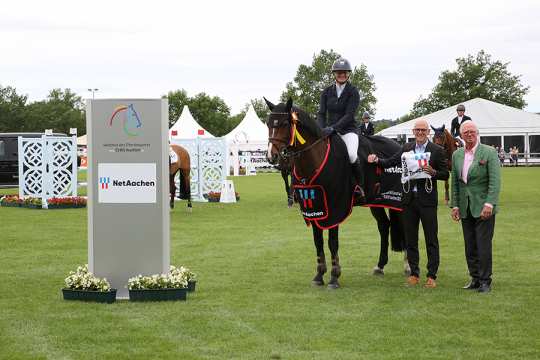