The four-in-hand-drivers opened the CHIO Aachen 2017 today with the Prize of the Firma Horsch, Der Entsorger, a dressage competition. This class also suffered the impact of the storm that suddenly hit the Soers. Whereby, this didn’t affect the performance of Australian’s eternal winner, Boyd Exell.

The Australian driver, Body Exell, who in the meantime lives in Valkenswaard, the Netherlands, is nearly always a team’s length ahead of his fellow competitors. He once again won the opening class of the four-in-hand competitions on a score of 36.99 minus points. Second place went to the USA, to Chester Weber (41.28 minus points). The driver from the Netherlands, Ijsbrand Chardon, was close at the heels of the competition from overseas, he finished third with a score of 41.86 minus points, followed by his fellow countryman, Koos de Ronde (46.2 minus points).

Tomorrow the cards will be reshuffled. In the Prize of the Martello Immobilienmanagement GmbH & Co. KG, the drivers will once again be competing in the dressage arena, but this time it in the first competition of the combined team and individual classification. 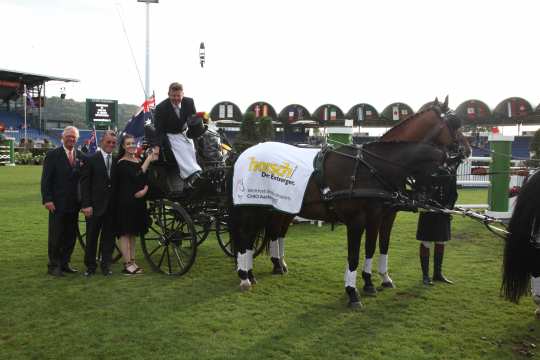