Boyd Exell drives to victory in the Prize of the Firma Horsch, Der Entsorger with a broken ankle

The dressage test was first on the agenda for the four-in-hand drivers in the Prize of the Firma Horsch, Der Entsorger today. The Australian driver, Boyd Exell, was once again unbeatable – in spite of a broken ankle.

The four-in-hand driver from Australia, Boyd Exell, is competing with a handicap at the CHIO Aachen this year. At the end of June, he landed unfortunately when jumping down from the coach box and broke his right ankle. But he didn’t want to miss Aachen. So he converted his carriage so that he can brake with his left foot instead, and now he is here. He has won the overall classification seven times since 2009. In 2014, he had to make do with second place and there weren’t any driving competitions in 2015.

And this year? With a broken ankle? It certainly didn’t stop him from taking the victory today. Boyd Exell won the opening class in the driving competitions, the dressage competition, in the Prize of the company Horsch, Der Entsorger, which doesn’t count towards the overall classification, with a big lead. Exell finished on a score of 34.18 minus points, the team in second place was awarded a score of 42.82 minus points. The latter was driven by Chester Weber from the USA – incidentally the only driver that has succeeded in beating Exell once at the CAIO Aachen in recent years. That was in 2014. Third place went to the driver from the Netherlands, Ijsbrand Chardon, with a score of 43.71 minus points. 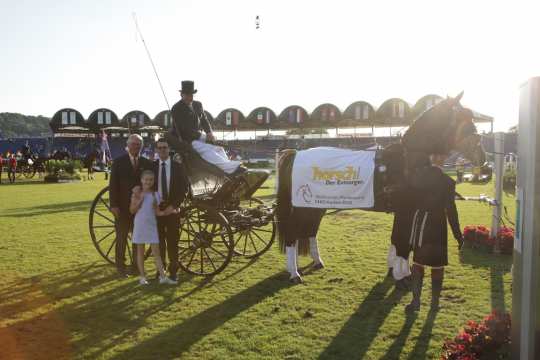