Bosty is the best in the STAWAG opening jumping class

The Marseillaise was played for the third time at the CHIO Aachen 2022, today after the STAWAG opening jumping class thanks to Roger Yves Bost (“Bosty”).

39 competitors had already entered the ring and nobody was faster than the Swiss rider, Pius Schwizer with Bakatina de Beaufour. In a time of 64.27 seconds, the Ogano Sitte daughter, took the lead in the STAWAG opening jumping class to the thunderous applause of the Swiss fans on the stand. Then came Roger Yves Bost from France – better known as “Bosty” – and the eleven-year-old Chacco-Blue daughter, Bluemuch des Baleines, and the pair knocked one and a half seconds off the time of Schwizer and Bakatina. None of the following four pairs in the class managed to top the 62.78 seconds, so Bosty secured the victory. That meant the sounds of the Marseillaise rang out over the Soers for the third time this week at the CHIO Aachen 2022, after France’s individual vaulters had already caused a stir at the weekend.

“I am very happy! My mare jumped brilliantly and is was fantastic to see how many spectators were already here today,” the elated winner commented. He knows his mare more or less inside out. “I have had her since she was a five-year-old. My son Nicolas used to ride her, then I took her over.” Her special features? “She is very unique!” He is not yet certain what their plans for the rest of the week are. “I will definitely ride her in a class tomorrow, but I don’t know which one yet,” he laughed. He added that fundamentally she is a candidate for the Big Tour.

Pius Schwizer and his Ogano Sitte daughter, Bakatina de Beaufour, ultimately finished second ahead of the new German Champion, Mario Stevens with his ten-year-old, self-bred Balou du Rouet daughter, Botakara. Stevens and Botakara were just seven hundredths of a second behind the Swiss duo. Stevens said that he hadn’t actually gone all out to win. “But I have a naturally fast horse and she felt super. So, it was a balancing act between risk and safety and I am delighted at coming third!” 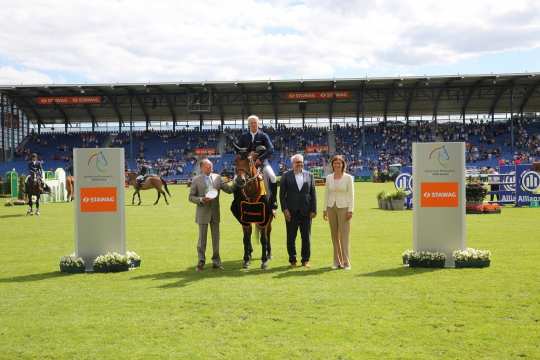