Big show before the top sport

There has never been such a show at the World Equestrian Festival, CHIO Aachen, before. “Forget everything you know about the CHIO Opening Ceremonies to-date,” the Show Director, Frank Kemperman, stated. During a press conference the organisers presented the Opening Ceremony 2016.

More than 160 horses and around 500 active participants are awaited in the impressive Main Stadium on July 12th, 2016(starting at 8 p.m.). Together with Frank Kemperman, Carl Meulenbergh, President of the event organisers Aachen-Laurensberger Rennverein e.V. (ALRV) and Uwe Brandt presented the programme. Brandt is the Director of the Aachener Grenzlandtheater, he also supported the organisers with the successful Opening Ceremony for the European Championships last year. What is awaiting the visitors on this Tuesday evening in July? Plenty of surprises, spectacular stunts, impressive show elements and all of this in the fascinating floodlit atmosphere of the stadium that holds a crowd of 40,000. The entire evening will centre on this year’s CHIO Aachen partner country Sweden.

“What is typical Swedish?” asked Brandt and promptly answered the question himself: ABBA of course, the Royal Family, Midsummer, and, naturally the characters out of Astrid Lindgren’s books. All of this is going to be brought to life on a very high level. In the case of Lindgren’s Karlsson on the Roof, who as we all know can fly thanks to the propeller attached to his back, this is meant quite literally. ALRV Chairman, Frank Kemperman, stated that the participation of Her Majesty Queen Silvia of Sweden at the Opening Ceremony is “an exceptional honour”. She won’t be coming alone either, she is namely going to be accompanied by magnificent mounted guards and the Royal Stables.

“Swedish culture and Swedish traditions, embedded in a colourful and spectacular show,” promised Kemperman. “The CHIO Aachen,” commented Carl Meulenbergh, “has stood for more than ‘just’ sport for many years.” And that is exactly what the audience expects, there is always a high demand for tickets for events such as the “Horse & Symphony” concert or indeed the Opening Ceremony. “The Opening Ceremony has developed into a real crowd-puller,” for which tickets are still available either online or from the hotline: +49-(0)241-917-1111. And what are the organisers’ expectations regarding the Opening Ceremony? Uwe Brandt: “The people should go home afterwards and say: Bless my old Swede, that was wonderful.”

The Swedish Equestrian Federation has engaged Owe Sandström and Lars Nilsson to direct the programme for the inauguration. Owe Sandström has had a very versatile career, he is among other things the designer of the stage costumes and outfits for Swedish super group Abba, and in equestrian circles the pair is known as the duo behind the opening shows of Sweden International Horse Show. “We will have a couple of hundred horses and even more people on the opening show in Aachen, says Owe Sandström. He will not give away the whole concept, but reveals that the interchange between Sweden and Germany as a historic journey will be one of the topics. “And of course we will present the Swedish culture and horses, all in our own special way.” 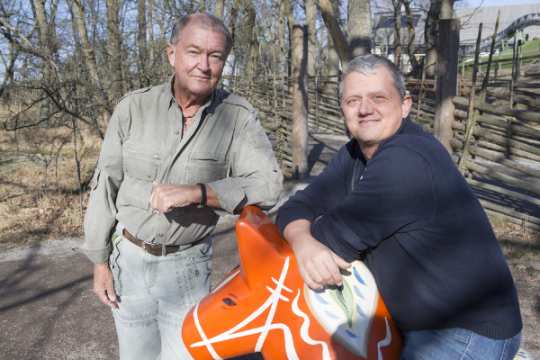