This year’s partner country of the CHIO Aachen had inspired the fantasy of the participants in the Prize of Handwerk. Several Japanese geishas danced through the Deutsche Bank Stadium tonight waving tender cherry blossoms in the air. But at the end of the evening, there was once again no way around the District Association of Mettmann.

“Is a ten enough?” the judges asked the Chief Judge and Commentator, Ulrike Nivelle, when the quartet of the District Association of Mettmann halted for their salute. Iris Charles with Le Schelm, Marco Schmit with Egon Hurry up, Alina Kirchhof with Discovery Agent and Maya Renee Hoose with Fara Bella were all dressed in kimonos. They performed half passes to Japanese pop music and Alphavilles Big in Japan, which hasn’t been played as often as this evening for years. The quartet totally impressed both the crowd and the judges. “Our hearts beat for this team! I don’t know how long you have practiced, but you were brilliant!”, raved Ulrike Nivelle. The score was accordingly high: 97.5 percent. That meant they claimed their third victory in succession.

Second place went to the local heroes from Aachen, who were also clad in kimonos and also performed (among others) to Big in Japan. Their final score 95.5 percent. The quadrille from the District Association of Neuss finished third with their choreography to Michael Jackson music (93.5 percent). 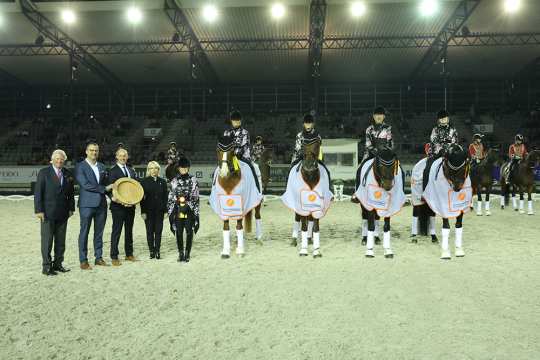