If the sponsor of the competition, Turkish Airlines, should ever decide to implement a horse as an advertising medium, Ben Maher’s Explosion W would be the right candidate for the airline. That the pair demonstrated today over the course of the Turkish Airlines-Prize of Europe, can literally only be described as a flight to victory.

It was as if Ben Maher and his just ten-year-old, Chacco Blue son, Explosion W, floated over the extremely demanding course in the Turkish Airlines-Prize of Europe. Among others, the course designer, Frank Rothenberger, had placed the fences over water that are dreaded in Aachen in the way of the riders for the first time this year. No problem whatsoever for Explosion W. “But for me definitely,” the rider admitted remorsefully and explained: “I had actually planned to ride nine canter strides in between, but it turned out to be eight.” Explosion solved something that would have faced other horses with a huge problem in his own style: simply took off a bit more energetically. There wasn’t a second in the jump-off where the crowd held its breath either, because there was no chance of him brushing a pole. Explosion completed one fence after the other often and easily jumping 30 centimetres higher than the obstacles. The pair reached the finish line in a time of 46.28 seconds, clear of course. “He gives you the feeling that there is nothing he is not capable of achieving,” raved his rider. So, it didn’t surprise him at all that the gelding jumped to the top on his debut appearance at the Aachen Soers.

Maher had a good explanation for his miscalculation in the first round: “I took a fall in the competition before and got kicked on my head. That obviously restricted my ability to count somewhat,” he joked, but then assured everyone: “It looked worse than it was.” And after his victory he was obviously feeling much better… Maher’s bottom line of the day: “We now know what we can expect on Sunday in the Grand Prix!”

A difficult course – Maher’s colleagues were of the same opinion. Second place went to the Spanish rider, Eduardo Alvarez Aznar, with his top horse, the 14-year-old Selle Français gelding, Rokfeller de Pleville Bois Margot, who has already competed at the Soers twice before, so he is familiar with the dimensions of both the stadium and the obstacles. After achieving a fantastic eighth place in the World Cup Finals in Gothenburg, the l’Arc de Triomphe son had taken a well-earned few weeks break from competing. “Aachen is his fourth outdoor show,” reported Alvarez Aznar. “The aim was for him to be as fresh as possible here.” The strategy obviously paid off. The pair took the shortest routes to reach the finish line clear in 47.08 seconds.

The 27,000 spectators cheered loudly in the Main Stadium as Daniel Deußer and his Zangersheide-bred stallion, Tobago Z, finished clear and went into the lead after the clock stopped at 47.71 seconds. However, his joy didn’t last for long, because his two fellow competitors who started behind him in the jump-off were quicker off the mark. Daniel Deußer was nevertheless very happy at coming third. “Tobago Z has had a few months break and was at stud. I have been getting him back into form over the past weeks and Aachen is first highlight in the season.”

Deußer knows exactly where he lost the decisive seconds in the jump-off: I could have taken one less canter stride on the way to the last fence. But in retrospect it was probably better that I didn’t.” This was a reference to the fall of the rider from the USA, Laura Kraut, who was on course to win up until the last obstacle, but then didn’t find the right take-off to the oxer at all with the Verdi daughter, Fleurette, because she had opted for the shortest route. The result was that both horse and rider fell. Luckily, neither of them hurt themselves. Fleurette trotted towards the exit, Kraut left the ring on foot waving to the crowd and received a consoling applause.

Daniel Deußer’s summary of the Turkish Airlines-Prize of Europe 2019: “Yes, the course was difficult, but we still had eleven clear rounds and two pairs that only had time faults. So, the course designer achieved his aim!” 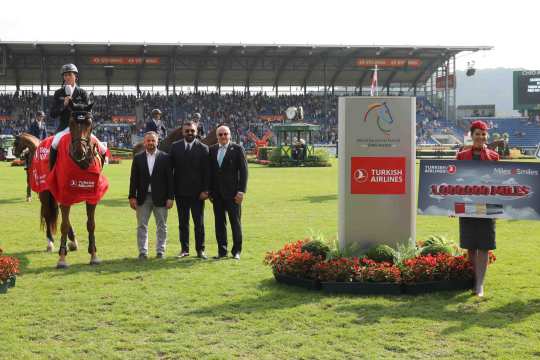