There is no better compliment that the show-jumper for the USA, Beezie Madden, could make a horse than comparing it with her Olympic gold medal-winning horse, Authentic. They are big hoof steps, that Madden’s KWPN-bred gelding, Garant, are to follow in. He took the first step today in the Sparkassen-Youngsters-Cup.

Namely, the eight-year-old Warrant son won this competition today after finishing clear in the fastest time in the jump-off of the Final of the Sparkassen-Youngsters-Cup. The clock stopped at 43.40 seconds as the chestnut horse galloped over the finish line. One man’s joy is another man’s sorrow. Because up until then the Brazilian rider, Eduardo Menezes, was in the lead with the also Dutch-bred, seven-year-old stallion H.Big Action by Action Breaker, with a clear round in a time of 43.51 seconds. As the last to go, Gerrit Nieberg and the Westphalian-bred Ben by Sylvain could have stolen the victory from Madden, but since the pair took three hundredths of a second longer to cross the finish line than Menezes, they ultimately ranked third.

Not only Beezie Madden and her team are proud of the winner (“We love him!”), but also the Dutch breeder, Willem Greve, from whom Beezie Madden acquired Garant as a six-year-old. Madden said he reminds her of her top horse, Authentic. Not appearancewise, but in terms of his talent, which is why he is called Junior at home. Among others the US rider won team gold at the Olympic Games in 2004 and 2008 with Authentic. She added: “Garant has everything that a horse needs to make it to the top – he has a super nature, is clever, talented and really careful!” 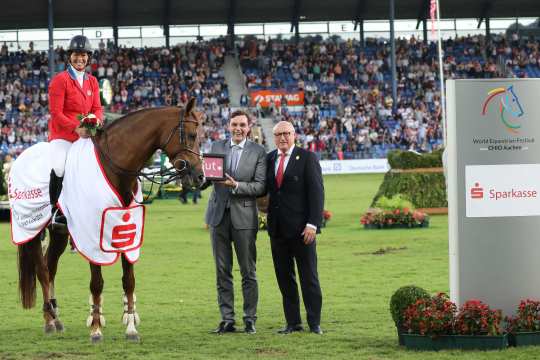