The one is a four-time Olympic gold medallist and many-time World, European and German Champion. He has additionally already won the Rolex Grand Prix at the CHIO Aachen three times. The other is World Champion, winner of the Champions League, many-time German Champion and he recently won the double with FC Bayern. Ludger Beerbaum meets Thomas Müller.
For the CHIO Aachen Magazine, the two of them chatted about the imminent European Football Championships, similarities between show jumping and football and about whether the atmosphere is better at FC Bayern or at the CHIO Aachen. We will reveal thus much in advance: Both of them answered this last question very diplomatically. Also in on the act: Thomas’ wife Lisa. The professional football player and the ambitious dressage rider know the CHIO Aachen well, they have namely already visited the Soers several times. In turn, Ludger Beerbaum announced that he is FC Bayern fan, who, whenever he gets the time, also supports the team in the stadium.

The full length interview will be published in the current CHIO Aachen Magazine, which is out at the beginning of June. It costs 6.50 Euros and will be sold at the offices of the CHIO Aachen as well as during the World Equestrian Festival, CHIO Aachen 2016 (July 8th- 17th). All subscription information (11.50 Euros/year plus postage) is available by sending an email to the Aachener Reitturnier GmbH: conny.muetze@chioaachen.de. 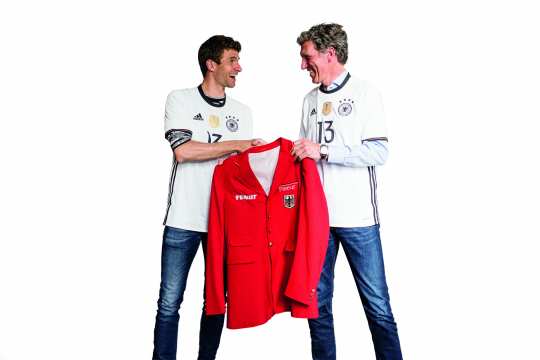