ALRV: Even after 120 years nothing but good news

In the 120th year after its foundation the Aachen-Laurensberger Rennverein e.V. (ALRV) is presenting itself with an excellent alignment. 80 days before the World Equestrian Festival, CHIO Aachen, begins the members that attended the General Meeting were delighted to hear plenty of good news.

The ALRV President, Carl Meulenbergh said on Tuesday evening at the Press Centre at the showgrounds,” the CHIO Aachen lives from unique and emotional scenes.” There were plenty of the latter at the CHIO last summer. Hans Kauhsen experienced one of these special moments. Upon his own request Kauhsen stepped down from the ALRV Board after many active years of service. He officially bade farewell to the crowd in Aachen with a lap of honour in a carriage. “The fact that the ALRV is so well-positioned is to a large extent thanks to his expertise and competence in financial affairs. Hans Kauhsen not only kept an eye on the money matters – while at the same time enabling significant investments – he also pushed the development of the CHIO Aachen with many ideas and immense commitment,” Carl Meulenbergh stated on Tuesday. The participating members loudly applauded the appointment of Hans Kauhsen as an Honorary Member of the ALRV.

In his review, Meulenbergh made particular reference to the partner country, the Netherlands. “Our neighbours impressed us with their joie de vivre,” according to the ALRV President. The CHIO Aachen 2017 successfully demonstrated once again what makes the event so special: A unique combination between sport, show, entertainment and first and foremost – a folk festival. Just under 360,000 people visited the CHIO Aachen last year. Many of them made use of the digital offers of the CHIO and it is important, “that we can also be a trendsetter here as well.” And with a wink of the eye Carl Meulenbergh outlined a trend: “It hardly ever rains at the CHIO anymore.”

Naturally, the ALRV Chairman Frank Kemperman particularly has his eye on the sport. It is going to be customarily high-class this year, because in the year of the World Championships most of the Chefs d’Equipe have already announced that they will be sending their strongest teams of horse and riders to Aachen. He is eager to see if after their victories in 2016 and 2017 the German show-jumpers will be able to pull off the “Triple” in the Mercedes-Benz Nations Cup. Kemperman made special reference to the “Lavazza-Cup” on Saturday evening. He noted that a party atmosphere prevailed during this competition that is a combination between driving, jumping and eventing, that “which could probably even be heard as far as the Aachen Cathedral”. What a lot of people don’t know: There were numerous events at the traditional showgrounds alongside the CHIO. The Chairman explained that there were 31 last year, many of which lasted several days.

Helen Rombach-Schwartz, Kemperman’s fellow board member, also had good news in store. The fiscal year 2017 that was checked by the accountants of the company ”Ernst & Young” closed on a profit of just under 8,000 Euros. Even 120 years after its foundation, the association is still standing on a solid foundation. “We will do everything in our power to continue this success story in 2018 too,” commented Carl Meulenbergh. Consequently, the Supervisory Board and the Executive Board were unanimously approved by the 114 members present. 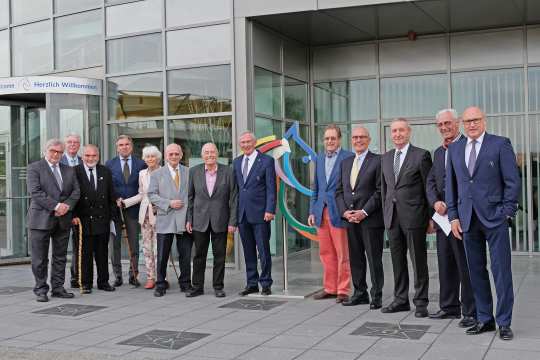 Carl Meulenbergh (in the middle) has distinguished long-time employees.