Action! in the Deutsche Bank Stadium during the Horse & Symphony

When “The Glorious Seven” galloped into the Deutsche Bank Stadium at full speed to Leonard Bernstein’s world-famous film music – performed live – from the classic Western and opened the Horse & Symphony, it was clear that this was going to be a special evening. When they then let the national symbol of the USA, the bald eagle fly through the Cathedral of classic dressage, each of the 6,300 spectators in the sold-out stadium knew this was going to be an exceptional show. And the furrow that the rogue left behind after he had tied the hands of one of the glorious seven together with a rope and dragged him out of the stadium behind his horse hardly bothered the sibling duo, Michael and Ingrid Klimke, when they subsequently celebrated their pas de deux at Grand Prix level to the sounds of a classic Frank Sinatra medley – true to the tradition of their famous parents.

However, this was but a prelude to a kaleidoscope of spectacular acts, accompanied by the Aachen Symphony Orchestra. The motto of the evening was “film music”. As such, the crowd was enchanted by Superman in the form of the international eventer, Jens Hoffrogge, with his English thoroughbred, Asagao xx, who galloped over obstacles at top speed (after all Asagao’s thoroughbred ancestors were bred for the horse racing sport; Anakin Skywalker and Twi’Lek, who saved the universe with their laser swords; the Spanish performer, Santi Serra, who repeatedly astounded the crowd and then made them laugh with his two Arabian horses and his two dogs with their emotional free dressage choreography; the impressive Grand Prix quadrille to the pompous sounds of Vangelis from the Hollywood blockbuster, “1492”; the fast-paced Sulky quadrille from Sweden to the feel-good music of ABBA; the Tra-Volta Show, during which the vaulter Daniel Kaiser (who is also competing in the Prize of the Sparkasse in Aachen) and his team vaulted on trabis instead of on horseback to the infectious music of “Pirates of the Caribbean”, etc., etc. etc. The French rider, Alizee Froment, with her beautiful Lusitano stallion, Mistral du Coussoul, rounded off the evening by performing all Grand Prix exercises – i.e. the most difficult dressage movements in the world – using just a neck rope instead of a bridle. She gave the CHIO crowd an insight into what they will be able to experience during the CDIO in the Deutsche Bank Stadium over the next few days: the perfect harmony between rider and horse while dancing playfully through the most difficult dressage movements in the world.

The evening was a full success, even the weather played along and the host, Volker Raulff, cheerfully led the crowd through the evening. He was accompanied by Christoph Lang from the Aachen Theatre, who told the crowd entertaining anecdotes about the films and the respective music. 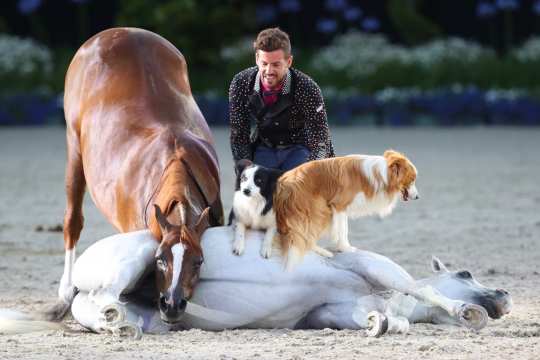