Prize of the Liselott and Klaus Rheinberger Foundation

A host of premieres

Last year the U25 dressage riders had to make do with second place in the Prize of the Liselott and Klaus Rheinberger Foundation, behind the Netherlands. This year they certainly took off on the right leg.

In 2017, the Dutch team succeeded in heading the field in the Nations Cup of the U25 dressage riders in the Prize of the Liselott and Klaus Rheinberger Foundation. This time Germany took the lead from the very first competitor onwards and didn’t let go over that lead again – victory for the trio comprising of Jil-Marielle Becks with Damon’s Satelite, Lisa-Maria Klössinger with Daktari and Juliette Piotrowski with  Sir Diamond, ahead of Sweden and the Netherlands. Ranking first in Aachen was not only new territory for the three dressage riders, but also for their trainer, Sebastian Heinze. He said: “Aachen always has a special standing. It is an absolute treat to be able to ride here. And when one rides out with the golden rosette on one’s bridle to boot, it is a unique experience!”

There were three “first times” for Jil-Marielle Becks today: Her first appearance in Aachen, she was the first to go in the competition and the whole experience was crowned by her visit victory in Aachen. One often maintains that it is impossible to win if you are the first rider. This alleged piece of wisdom was proven wrong today by the 20-year-old Becks and her own-bred Damon’s Satelite. After a solid performance, the pair earned a score of 72.382 percent – a result that none of the following pairs was able to top.

Yes, Aachen is definitely different to all other shows she has taken part in previously, revealed Jil-Marielle Becks later. Furthermore, it is her first U25 year and her horse is only ten years old. And then to ride in Aachen straight away… But the two of them certainly proved that they are ready for the CHIO. And whoever is ready for that can compete anywhere, the national coach, Heinze, stated. “It is a different kettle of fish when the U25 generation rides in front of five-star judges. They have a different benchmark and demand real Grand Prix riding.”

Sebastian Heinze was however also delighted about the result of the second German rider, the reigning U25 European Champion, Lisa-Maria Klössinger with Daktari. The gelding sustained an injury in May and has not competed since. He regained form just in time for the CHIO. The pair were already on the CHIO national team last year, but unfortunately back then the highly-sensitive Württemberg-bred horse let himself be distracted by the setting. That was much better today – although his rider is convinced: “He remembered it. When we entered, his eyes were like saucers!” However, she managed to reassure him and finish the class on a score of 71.971 percent, which meant third place behind Jil-Marielle Becks and the best-placed Swedish pair, Marina Mattsson with Quartermain (72.029).

The only person things didn’t go as planned for today was the third member of the team, Juliette Piotrowski with Sir Diamond. “I was really annoyed at myself,” commented Piotrowski. “I rode him carrying his head a little too high the whole time and was no longer able to get him to relax his back as normal, which meant we lost a lot of our expression. I should have corrected that, but I didn’t quite dare. Aachen is simply a totally different show.” The pair came ninth with a score of 68.706 percent. Juliette took it bravely: “We’ll do better in the individual classification!” 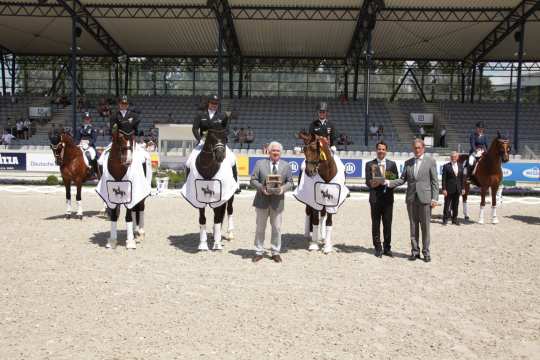