The place: perfect. The weather: perfect. The atmosphere: perfect. Soers Sunday, the traditional Open Day at the CHIO Aachen brought with it all ingredients for a perfect day this year. Around 30,000 people came to the showgrounds at the Soers on Sunday.

A diversified programme with free admission awaited them. Not only the CHIO Village with more than 210 exhibitors and a wide range of catering options was well-attended, but also the many attractions dotted around everywhere encouraged the visitors to spend time, marvel and join in. “The people from Aachen simply love ‘their’ Soers Sunday. Many of them have been planning it as a fixed family outing for years,” said Show Director, Frank Kemperman. “When we introduced this event as the Open Day exactly 20 years ago, it was planned as a one-time gift to the citizens of Aachen. That’s how things sometimes turn out (laughing). Today, 30,000 people were here, the weather was fantastic – a perfect day. Let’s hope that is how it continues,” said Kemperman.

Following tradition, the day kicked off at 11.30 a.m. in the Deutsche Bank Stadium with a festive Ecumenical Service under the motto “Noah’s Arc”. A children’s choir lent the open-air event the appropriate, pleasant musical background. However, the official starting shot didn’t go off until 1 p.m. on the jumping warm-up area, which was followed by a colourful entertainment programme. The best places in the front row of the “green stage” filled quickly. Because everyone wanted to have the best view of the exceptional show acts. Following the fast-paced motto “Shetty PS, full speed ahead to vacation time” speedy Shetland ponies from the St. Medarus Zülpich Driving Club took the training area by storm. The Fohlenhof Farbenfroh also brought Shetland ponies with them to Aachen and delighted the spectators with their show performance “Miniature Spanish Riding School”. The pony forecast for today’s World Cup Final (which incidentally predicted France as the clear winner), foals, a show act entitled “Cowboys and Indians” by the Biesenbach Riding School and impressive Mustangs rounded off the agenda. In between the five disciplines at the CHIO were graphically presented and explained..

But there was plenty more the small visitors to discover: There was a choice between pony rides, visiting the play trailer of the Rhenish Rural Youth alongside the Driving Stadium and the exciting “Children’s Nature Trail”, where equipped with a stamp card they could visit various different stations. A gift from the CHIO Aachen fan shop awaited all of the diligent gatherers. Of course, the CHIO mascot Karli was out and about all over the showgrounds and posed for souvenir photos.

In the scope of the charity campaign “Moments of Luck”, the four therapy centres from the region presented their self-choreographed programme to the crowd at the Soers Sunday audience, whilst donations were collected across the entire showgrounds for the campaign. This year the charity initiative celebrated its 20th anniversary. 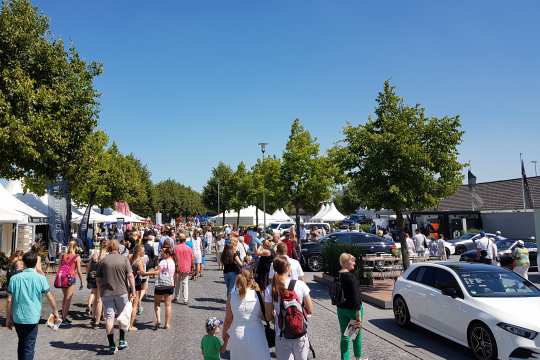 What a perfect day: The Soers Sunday 2018