The competitions in the men’s classification of the Prize of Sparkasse at the CHIO Aachen 2017 turned into a purely German affair. In the end, Thomas Brüsewitz repeated his victory from the previous year – in spite of a small blunder in the freestyle.

After taking the victory in the concluding freestyle, Thomas Brüsewitz walked off with the Prize of Sparkasse 2017. After all three disciplines he finished on an overall score of 8.071. He danced to victory in the freestyle as if gravity doesn’t exist. There was however an unsteady moment when Brüsewitz didn’t land squarely on the back of his horse Bigstar after a risky high jump. But as the national coach, Ursula Ramge, stated: “Thomas is so mentally strong in the meantime that he can adapt to every situation.” And so, the 23-year-old completed his routine without making a further mistake.

“Thomas is a fantastic athlete,” is how the national coach praised her protégé. “He combines strength and agility, which can’t always be taken for granted among men.” Ramge added that furthermore, the vaulter, horse and lunger Irina Lenkeit have grown together more strongly and have become a really harmonious unit, a theme which is often forgotten when talking about vaulting. Incidentally, the motto of Brüswitz‘s freestyle was extremely unusual. He is a big Michael Jackson fan and he had chosen a piece of music that wasn’t released until after the King of Pop’s death – “Blue Gangsta” – hence it is fairly unknown.

Second place in the freestyle and in the overall classification went to Erik Oese on Calvador, lunged by Andreas Bäßler. After finishing fifth in the compulsory test, the tall vaulter, Oese, who will be celebrating his 30th birthday in September, came up trumps in the technical test. And his freestyle routine entitled “Ghost” was a feast for the eyes. Only very few people move as elegantly, nimbly and expressively as the high school teacher from Radebeul. When he adjusted his “ghost’s mask” in time with the cracking noises of the music, a shudder went down the spines of some of the spectators. Fortunately, it is just show! Oese was awarded a score of 8.501 for his freestyle. Added to his other results this made a final score of 7.999.

That sufficed to keep Viktor Brüsewitz with Don Filippo B and his lunger Lisa Borgmann at bay. Today the muscleman among the German vaulters “only” ranked fifth. But having come third in both the compulsory and technical tests, Viktor Brüsewitz – who is incidentally the elder brother of the winner – was able to defend his position. Albeit only just. Only two hundredths of a point lay between Brüsewitz and the Swiss vaulter, Lukas Heppler, on Cairo (Lunger: Petra Cinerova), who claimed fourth place in each of the three disciplines. Heppler finished on an overall score of 7.798, Brüsewitz on 7.800.

The fourth German contender in the competition, Jannik Heiland, the training partner of the Brüsewitz brothers, on Highlander (Lunger: Winnie Schlüter) had to make do with fifth place. Which is bitter because a fall at the end of his up until then fantastic technical test yesterday was especially bad luck. Heiland lay in second place after the compulsory test. But after the fall he dropped right back in the overall classification and wasn’t able to catch up the lost points in spite of coming third in the freestyle.

All in all, not only the athletes, but also the trainers had every reason to be extremely satisfied with the competition so far: “Our guys have set the bar high in all of the competitions,” is how Ursula summarised the situation from her point of view as the national coach. Tomorrow, the Nations’ Cup is on the agenda. One thing is already certain, Team NORKA from VV Köln-Dünnwald will be Team Germany I and Neuss-Grimlinghausen is Team Germany II. Which individual vaulters will be competing in which team will be announced tomorrow. 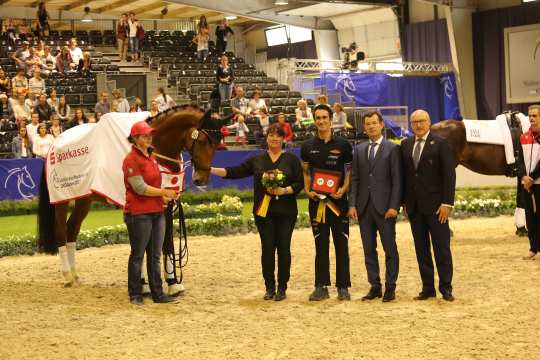