The XXXL Pallen Marathon course was tough! The opinions of the four-in-hand drivers were unanimous here. The Germany driver Christoph Sandmann and his team mastered the course the bests. Germany was able to significantly improve its standing in the Nations’ Cup classification. The rankings in the Prize of the Richard Talbot Family is unchanged.

Eight obstacles awaited the drivers and their teams. They first had to complete the roads and tracks phase beforehand, which itself was demanding for the horses. And the obstacles in Aachen are no easy task either. The times that the drivers need to complete the obstacles are decisive for the scores. The times are namely converted into penalty points so that the driver with the least points wins. Today, this was Christoph Sandmann, who had harnessed the same four horses in Aachen with whom he won the German Championships in Riesenbeck. “The ideal team in the Marathon,” praised Karl-Heinz Geigerl, the national coach.

Christoph Sandmann stated that he had had to drive an unplanned circle at the last obstacle. But in spite of this, his overall time of seven minutes and 25.36 seconds still proved to be the time to match. Converted into minus points, his overall score was 111.34, which meant the second victory for him in Aachen after yesterday “Hunt for Points” competition.

After the Germans lay in a disappointing fifth place after the dressage, they set out to catch up in the Marathon and are now lying in second place with an overall interim score of 341.510 minus points, behind the leading team, Holland (326,510), with the Belgian team close behind them in third place (342.870).

After his excellent dressage test and fourth place in today’s XXXL Pallen Marathon Boyd Exell is still clearly in the lead in the individual classification of the combined competition, the Prize of the Talbot Family, with an overall score of 152.70 minus points. His eternal rival, Ijsbrand Chardon, is currently in second place (162.48). Belgium’s Edouard Simonet is on course for bronze (164.41).

Thanks to his outstanding performance in the Marathon, Christoph Sandmann was able to move up from ninth place after the dressage into fifth place. The end result in the team and individual classifications will be decided tomorrow by the obstacle driving competition. Christoph Sandmann already proved yesterday in the “Hunt for Points” competition, that the balls normally stay in place for him, we will just have to wait and see. 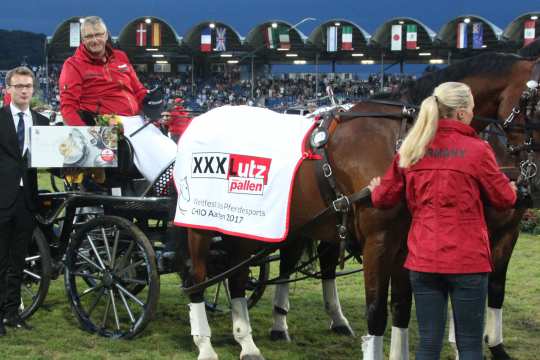