World-class prelude in the Prize of Sparkasse

CHIO Aachen again at last, the World Equestrian Festival again at last! The venue date may be a different one than usual, but otherwise even under Corona conditions the CHIO Aachen offers everything the athletes, visitors and all persons involved know and love. The vaulters kicked off the event in top-class style today.

First the compulsory components, then the freestyle – that’s how life works and the same applies for the vaulters. Today, the compulsory and technical tests were on the agenda for the ladies and the men and the group vaulters completed their compulsory test. In these competitions, the exercises the athletes have to perform are laid down. For the horse-back acrobats the initial opportunity to demonstrate their skills to the judges.

In the men’s competition, Thomas Brüsewitz would actually like to claim his fifth victory in Aachen in a row. However, there is one fellow competitor, who would like to prevent that from happening: Jannik Heiland, the flat-mate of Thomas’ brother Victor. Thomas also refers to Jannik as being “like a brother to me” too. Today, Jannik Heiland moved into the lead slightly ahead of his “siblings”. Like Janika Derks, his four-legged partner was Dark Beluga with Barbara Rosiny on the lunge. His overall score totalled 8.366, which was made up of a 8.623 in the compulsory test and 8.109 in the technical test. Thomas Brüsewitz on Eyecatcher lunged by Alexandra Knauf came second in both competitions, achieving a score of 8.549 in the compulsory test and 8.071 in the technical test (Overall score: 8.310). Jannis Drewell on Qualimero OLD, lunged by his mother, Simone Drewell, finished third in both competitions on an overall score of 8.023 (Compulsory: 8.196, Technical: 7.868).

In the Group contest, it once again looks like it is going to be a duel between Fredenbeck and Team Norka from VV Köln Dünnwald. In the compulsory test, the defending title holders from Fredenbeck, who are also the reigning World Champions, didn’t look like they were going to make do with second place. With an overall score of 7.978, they asserted themselves against Team Norka on Calidor lunged by Patric Looser (7.777). Third place went to the Danish Group BIS 1 on Turbo Af Kloster, lunged by Maria Rasmussen (6.769). 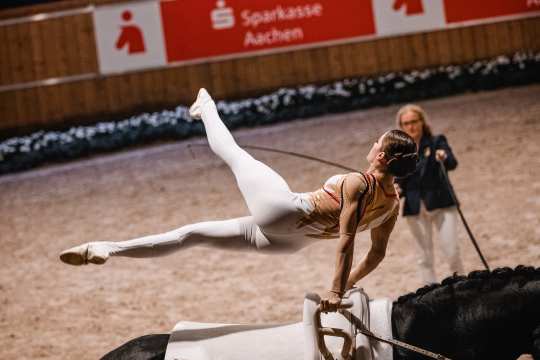 Janika Derks at the start of the vaulting competitions in the "Prize of the Sparkasse". Photo: CHIO Aachen/ Franziska Sack