World Champion wins the Prize of Family Tesch, Germany in the lead in the Lambertz Nations Cup

The dressage queen, Isabell Werth, is on the best way to winning the Dressage Grand Prix of Aachen for the third time in succession. She laid the foundation today with her World Champion partner, Bella Rose in the Grand Prix of the Prize of Family Tesch, which is also the first competition in the Lambertz Nations Cup.

The team and individual World Champions, Isabell Werth and Bella Rose, rode to victory in the Grand Prix, the Prize of Family Tesch with a sensational score of 82.783 percent. Second place went to the German Champions, Dorothee Schneider and Showtime (80.609 percent). To her own surprise, the three-time Olympic gold medallist, Charlotte Dujardin, finished third with her second-string horse, Erlentanz. Her overall score: 79.152 percent.

Isabell Werth and Bella Rose’s performance was virtually perfect. They only made one small mistake in the one-tempi flying changes. “Completely unnecessary,” the most successful dressage rider of all time said, slightly annoyed. However, her delight at the successful performance soon clearly overweighed her annoyance: “It was a great test! The mare was extremely concentrated. I am totally happy!” And she had every reason to be. Especially since the German national coach, Monica Theodorescu, waved away the mistake in the flying changes when interviewed: “That doesn’t matter when one takes into consideration the super piaffe and passage tour.” Here as well as for the transitions and the seat and influence of the rider she was awarded the highest possible mark of 10.0 several times.

Indeed, the judges dealt out plenty of 10s today, also to the recently crowned “German Master”, Dorothee Schneider with Showtime, with whom she won Olympic team gold. After the CHIO Aachen in 2018, the meanwhile 13-year-old Hanoverian-bred Sandro Hit son was out of action for a long time due to injury. He didn’t start competing again until the spring. The long time-out obviously did him no harm. Showtime already excelled at the German Championships in Balve and he was able to repeat this form again today. Dorothee Schneider commented: “Showtime has grown up, he is much more self-confident.” She added that he had listened to her today much better than last year and had been very concentrated. Not even a loud noise – probably a bottle falling over on the stand – didn’t even distract the pair. It was just rather annoying that it had to happen in the middle of the half-passes that count double. Showtime flinched briefly, but was immediately by his rider again. However, it cost the pair a few valuable points – as did a small mistake in the one-tempi flying changes. Nevertheless, the highlights such as the passage, the extended walk, piaffe, the transitions and the overall fresh, motivated impression the gelding made dominated their performance.

Great Britain’s dressage darling, Charlotte Dujardin was back in the Deutsche Bank Stadium for the first time since the European Championships in 2015. And she was still amazed at how much the riders in the arena can feel the spectators on the stands. How much one registers how they held their breath and gasped after even the smallest mistake. Charlotte Dujardin had saddled the Trakehner, Erlentanz, for this year’s test. Aachen will be the last joint show for the pair. The 12-year-old Latimer son belongs to one of her pupils and her mentor, Carl Hester: Sonnar Murray Brown. Erlentanz and his owner competed in their first Grand Prix competitions together last year and will be taking “Erly” back on after Aachen. He had asked Charlotte Dujardin if she could ride his horse at competition because he broke his leg and was out of action for quite a while. Dujardin said yes straightaway. Since then they have won three competitions at three shows in England, but hadn’t ever achieved a result like today, 79.152 percent and a personal record! And that in spite of the fact that Dujardin hadn’t really had any high expectations: “I knew the Germans would be competing with their best horses. Erlentanz is a super horse, but I really hadn’t expected to achieve this result. I simply wanted to enjoy this wonderful show and have fun.”

Dujardin and Erlentanz narrowly beat Jessica von Bredow-Werndl with Dalera BB, who came fourth on a score of precisely 79 percent. The absolutes highlight of this pair: the piaffe/passage tour! Small errors like halting too early and a slight mistake in one of the flying changes in the zig zag half-passes cost them valuable points. But Jessica von Bredow-Werndl’s overall comment was: “The mare is incredible! She is a machine in the positive sense of the word!”

The only German team member, who things didn’t run smoothly for today, was Helen Langehanenberg. Her Damsey apparently had two left hooves today, striked before the piaffe tour, halted and only let himself be motivated to show a few piaffe steps after being energetically persuaded to do so by his rider. The pair slipped down to 18th place in the ranking with a score of 71.239 percent. She was consoled by her team mates. Isabell Werth: “She mastered the situation well, I take my hat off to her!” And the German national coach, Monica Theodorescu, was also full of understanding: “Helen was rather unlucky, but that is part of our sport. Things like that have happened to us all.” She must know, after all she was one of the best dressage riders in the world herself for many years and her name is also on the winners’ board recording the winners of the Dressage Grand Prix of Aachen.

Monica Theodorescu is as equally successful in her role as trainer. On a total interim score of 242.392 points, Germany is currently clearly in the lead in the Lambertz Nations Cup, ahead of the Danish quartet on 228.174 points and the team from the USA (225.392). It would be the sixth victory of the German squad in the Lambertz Nations Cup under the aegis of Monica Theodorescu, who only took over the position in September 2012. The final result of the Nations Cup will be revealed after the second competition on Saturday, the Grand Prix Spécial, the MEGGLE Prize. 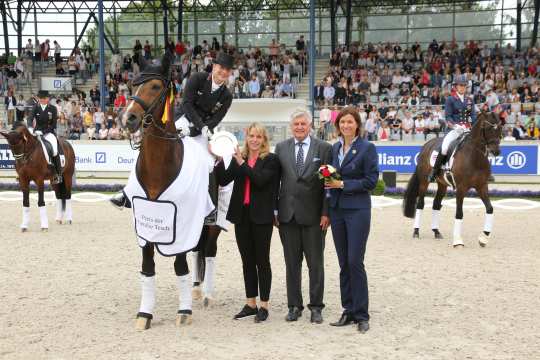